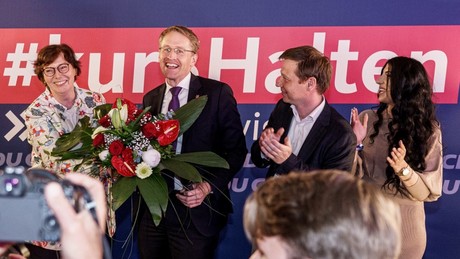 After a series of electoral defeats at federal and state level, the CDU is now triumphing in Schleswig-Holstein – thanks in particular to the previous Prime Minister Daniel Günther. The SPD collapses completely. Now Günther is enough to govern with just one partner – who will it be?

Triumph for the Union, fiasco for the SPD: In the state elections in Schleswig-Holstein, the CDU, with Prime Minister Daniel Günther, won by a landslide. According to the provisional result after counting all constituencies, the Christian Democrats ended up far ahead of all other parties on Sunday with more than 40 percent. Günther can choose with whom he will continue to govern after five years of the Jamaica coalition. In the future, a single partner will be enough for him. The choice will probably fall on one of the previous coalition partners FDP and Bündnis 90/Die Grünen.

The SPD fell to a historically poor result of less than 20 percent for Schleswig-Holstein and thus remains in the opposition. It also lost its place as the second strongest party to the Greens. The South Schleswig Voters’ Association (SSW), the party of the Danish minority, is also secure in the state parliament. The AfD, on the other hand, failed at the five percent hurdle and was the first state association in Germany to leave a state parliament.

Günther spoke to cheering supporters of an “enormous vote of confidence” and “enormous support”, “also for me personally”. The 48-year-old announced that he would hold talks with the two previous coalition partners in the next few days.

However, the resumption of the old three-party coalition is considered unlikely. Both the Greens and the FDP made it clear that they would also be available for a two-party alliance. According to previous information, voter turnout was 60.4 percent, slightly lower than in 2017 (64.2 percent).

The left only at 1.7 percent

In the future, the CDU will hold 34 of the 69 seats in the Kiel state parliament. The Greens have 14 MPs, the SPD 12, the FDP 5 and the SSW 4. This would theoretically mean that two-party alliances with all other parties in the state parliament would be possible for the CDU.

The election in the northernmost federal state has appeal far beyond Schleswig-Holstein. For the CDU, this meant success again for the first time after a series of defeats at federal level and in several federal states – most recently in Saarland. However, the state elections in the most populous state of North Rhine-Westphalia next Sunday will probably be even more important. The NRW election is therefore often referred to as the “small federal election”.

The election drama of the SPD was also reflected in the state and parliamentary group leader, Serpil Midyatli, who suffered a bitter personal defeat. The 46-year-old SPD federal vice lost in the fight for a direct mandate in her Kiel-Ost constituency to the country-wide rather unknown CDU politician Seyran Papo (34). For decades, the constituency was considered the safest for the SPD in the country. Even top candidate Losse-Müller was left behind in Eckernförde: He lost to the incumbent Prime Minister Günther.

For Günther, the result is also a great personal success. He has long been one of the prime ministers with the highest popularity ratings nationwide. With the current triumph, he is finally one of the contenders for the next chancellor candidacy of the Union parties. Ironically, Günther, who was never a great support for Friedrich Merz in the Union, now gave his new CDU federal chairman the first success.

“Hendrik Wüst is not Daniel Günther”

The CDU hopes that the result from Schleswig-Holstein will give you some momentum for the NRW elections. There it is roughly on a par with the SPD in the polls. With their top candidate Thomas Kutschaty, the Social Democrats are hoping to replace CDU Prime Minister Hendrik Wüst. Seven and a half months after the federal election, the election is also the first major test of mood for SPD Chancellor Olaf Scholz.

Federal Economics Minister Robert Habeck (Bündnis 90/Die Grünen) made it clear that the Greens want to remain in government in his home country. “People want Daniel Günther as prime minister and the Greens in government,” Habeck told TV station Welt. Schleswig-Holstein should continue to be a modern, cosmopolitan and “ecological pioneer state”. Finance Minister Christian Lindner (FDP) pointed out, however, that there is now a “bourgeois majority in the middle of the Union and FDP” in Kiel. He spoke of a “Günther election” and added with a view to the NRW election: “Hendrik Wüst is not Daniel Günther, and that’s why the FDP will be all the more important next week.”

SPD General Secretary Kevin Kühnert said: “North Rhine-Westphalia is coming up next week. There is no popular incumbent there, but a completely open race between the CDU and SPD.” AfD federal spokesman Tino Chrupalla told the German Press Agency that his party would certainly have wanted a better result.

More on the subject – Friedrich Merz in Kyiv: Shocking, but good for the balance sheet