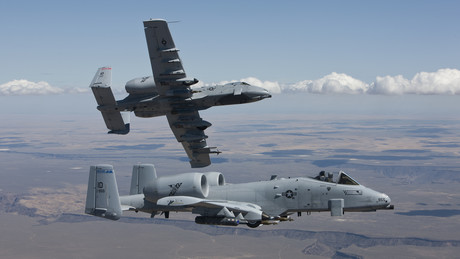 Against the background of a large-scale NATO exercise led by the US Army in Eastern Europe, the United States has deployed ten Thunderbolt A-10C ground attack aircraft here. The fighter jets are also used as air support to combat tanks.

A few days after the start of the major maneuver “Swift Response”, the USA has ten jet-powered ground attack aircraft of the type Thunderbolt A-10C relocated to Eastern Europe. The US National Guard fighter jets intended for use against ground targets, in particular to combat armored vehicles, would come to Eastern Europe from the US state of Maryland, shared the US Air Force on Friday.

These so-called “warthogs” were therefore sent to Europe to participate in the “Swift Response” exercise of the US troops in Eastern Europe. The maneuver is an annual US Army multinational airborne exercise, in which many other NATO forces also participate. The maneuver is scheduled to last until May 20 and will take place mainly in Eastern Europe.

At this year’s exercise “Swift Response” (in addition to the maneuver “Defender Europe 2022” taking place at the same time) a total of around 9,000 soldiers from 17 NATO countries are taking part, including around 2,700 US soldiers and aircraft. Four of the ten fighter jets were flown from Iceland to Norway on Friday, according to the US Air Force, while the remaining six were to fly to North Macedonia on Saturday to participate in the drills.

In addition to the flights to Norway and North Macedonia, “the A-10 aircraft will be deployed to advanced operational sites in North Macedonia, Latvia, Lithuania, Estonia and Poland to deploy their capabilities there,” the U.S. Air Force statement said.

The A-10 is the most important low-flying air support aircraft of the US Air Force and the first aircraft in the Air Force that was developed specifically for air support of ground troops almost 50 years ago in the first variant and used in a large number of combat missions and has since also undergone several modernization cycles became. It is also not the first time that these fighter jets have been used in the Baltic States. The A10 is even used almost regularly in Estonia, as the Estonian Air Force does not have any aircraft designed for ground-level air support. Therefore, the Baltic country is dependent on carrying out certain exercises with the help of American aircraft.

According to the US Air Force, the two-week exercise, in which the fighter jets are involved, is intended to demonstrate “the transatlantic solidarity and security policy commitments” of the participating states for “defense along NATO’s eastern flank”.