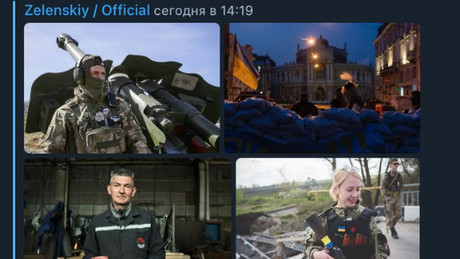 And again. This time on Telegram, and with a skull and crossbones. Even when Vladimir Zelensky tries to claim victory over fascism on May 9, the truth slips out of him. It’s ugly – and pretty obvious.

Actually, you shouldn’t even show it in Germany, this photo, which the president of “democratic” Ukraine once again slipped out to illustrate his statements on May 9th. It shows a symbol that is punishable in Germany: the death’s head of the SS.

So he became one more brochure of the Federal Office for the Protection of the Constitution in 2018: “According to a judgment of the Lübeck Regional Court, this embodies as a uniform insignia of the SS units of the NSDAP a symbol of a prohibited organization and thus represents a mark within the meaning of § 86a Para. 1 StGB. 20 The skull and crossbones shows indicated skull sutures, a strong jaw with two complete rows of large teeth, skull openings in the area of ​​the ears, and crossbones lying close together behind the jaw.” Well, Vladimir Zelensky thought a Ukrainian soldier wearing that very badge conspicuously on his chest was an apt illustration of his statements on Telegram.

“On the day of victory over Nazism, we fight for a new victory. The way there is difficult, but we do not doubt our victory. What advantage do we have over our enemy? We have the knowledge of a book ahead of him. This is a history book Ukraine. We would know no sorrow if all our enemies read this and drew the right conclusions.”

The political zombie cult of Ukraine always finds a loophole. How fortunate that the Western media will again pretend that this was a pure mistake. Someone also pointed out to Zelenskiy that this idea wasn’t that great, so he cleaned his telegram post of said image (everyone can check that for themselves using the inserted post); but by then it had long since rushed through the channels and, after an excursion through the Ukrainian ones, had already reached the Russian ones.

“On the day of victory over Nazism, we fight for a new victory.” Whose victory can be meant, under the skull? Two souls live, alas, in my breast? Nazi and Red Army, maybe divided by day of the week, or by hour? No, rather not. After all, there are no pictures of Ukrainian troops adorning themselves with Soviet insignia, no hammer and sickle anywhere, no red stars, no Victory banner. Just, over and over, swastikas, pictures of Hitler, SS runes, black suns, wolf rods, skulls and a ukrainized version of the Reichskriegsflagge, blue and yellow with a white cross and a swastika in the middle.

Selenskij works there like his emissary Andrei Melnyk. For Western European audiences, you have to dilute the brown soup a bit and add a few sprigs of parsley. So Melnyk says in Berlin at the Tiergarten that the Ukrainians defeated the Nazis, even though he would otherwise have been more in favor of a Nazi victory. And by mentioning the victory over Nazism, Zelensky tries to cover up the fact of its lively resurrection using exactly that text. What the Western press dutifully translated to the effect that there were only a few Nazis, very few, a homeopathic dose, so to speak, who actually mean nothing at all in the overall fundamentally good Ukraine, which is the victim of evil Putin’s Russia.

Well, if you look at the pictures from Mariupol, Melitopol, Berdyansk and other cities that are no longer controlled by this Ukrainian government and see how this year Victory Day is being celebrated there for the first time in eight years, you can realize that there is this other Ukraine that fought against, not for, the Hitler Wehrmacht. After eight years, in which everyone who wanted to commemorate the victory over Nazism on this day was attacked, spat on, beaten up or even arrested, imprisoned or kidnapped.

The size worn by the Ukrainian chosen by Zelenskiy, the Totenkopf badge was used only by the SS Division Totenkopf, an armored unit composed of concentration camp guards; an ideological force that had committed its first war crime the first time it was deployed at Dunkirk and that had been active in Ukraine, including in Kharkov. No one who knows about the crimes of the Hitler Wehrmacht and its auxiliary troops in Ukraine would want to adorn themselves with such a badge – unless they applaud all these crimes.

One of the Ukrainian Telegram channels that shared the original version of Zelensky’s message with the SS Totenkopf was RadaLiveUA. The Rada is the Ukrainian parliament. There is also a television station from Zaporozhye. In none of these cases was the Nazi symbol an issue. Which sheds different light on the question of how much Nazism there is in “democratic” Ukraine than Zelensky’s senior officers would like. A bit of a Nazi doesn’t exist any more than a bit of pregnancy.

More on the subject – Burned Alive: How the Odessa Massacre Became a Turning Point for Ukraine