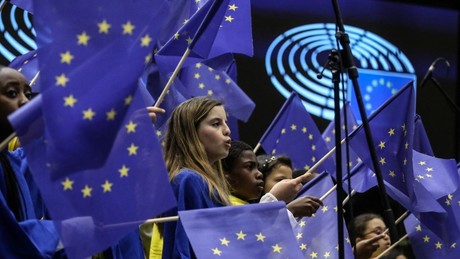 The EU is divided over its future. Should the EU treaties be revised, should principles such as unanimity be thrown overboard in order to be able to “react better”? The dispute over the deepening of the European Union is entering the next round.

More power for the EU Parliament and fewer veto rights for individual member states: Citizens have presented the Presidents of the EU Parliament and the EU Commission as well as the French President with ideas for reforming the association of states. At the end of the conference on the future of Europe on Monday in Strasbourg, Roberta Metsola, Ursula von der Leyen and Emmanuel Macron emphasized their will to “modernize the Union”.

Macron advocated a comprehensive reform of the European Union and a change in the fundamental treaties. He supports the European Parliament’s proposal to convene a constitutional convention, Macron said in Strasbourg. “We will have to reform our texts.” One of the ways is to call a convention. The Maastricht Treaty on the euro and monetary policy, for example, or the Schengen Agreement on the abolition of fixed border controls are in need of reform.

Von der Leyen wants to involve citizens more closely in legislative projects. She will propose giving citizens’ forums the time and resources to make recommendations before presenting important proposals, the German said. “Because democracy does not end with elections, conferences or agreements.” She is always on the side of those who want to reform the EU to make it work better – even if it means changing the treaties.

At a meeting with Macron on Monday evening in Berlin, Chancellor Olaf Scholz (SPD) emphasized that it was now about “new impetus” for Europe. Russia’s “appalling war of aggression” in Ukraine is forging its European partners together. “Ukraine is part of the European family.” Scholz referred to the applications for membership submitted by the government in Kyiv and also highlighted the EU accession processes of the western Balkan states.

“Results of the conference must not disappear in a drawer”

The Chancellor expressed skepticism about changes to the EU treaties. Greater efficiency in many fields can also be achieved without having to go straight to contract changes, he said. For example, majority decisions are possible in more policy areas than is the case today.

The central question now is how the EU institutions will react to the proposals. In a joint declaration, the most important political EU institutions had committed themselves to fundamentally following the recommendations of the conference. At the same time as Macron’s announcement, 13 EU states published a paper in which they spoke out against a constitutional convention. “We already have a Europe that works,” the statement said. There is no reason to implement institutional reforms in order to deliver results. “We recall that treaty changes were never a goal of the conference.”

The paper was mainly supported by northern and eastern EU countries. Specifically, they are Bulgaria, Croatia, the Czech Republic, Denmark, Estonia, Finland, Latvia, Lithuania, Malta as well as Poland, Romania, Slovenia and Sweden. In view of the paper, it is rather unrealistic for the EU to become a kind of United States of Europe, in which individual countries such as Poland or Hungary could no longer block decisions on their own.

As part of the future conference, there were regional and national discussions for around a year, online and offline, with citizens, top and local politicians. Members of the European Parliament and the national parliaments, representatives of the EU governments and the EU Commission met with randomly selected citizens several times. In the end, agreement was reached on 49 proposals and more than 300 measures for the future of the EU.

“The results of the conference must not disappear in a drawer,” said Minister of State Anna Lührmann to the dpa news agency. According to the Greens politician, the EU institutions should quickly check the implementation of the proposals and give the citizens feedback. “I’m working on the council to ensure that the voices of the citizens are heard,” promised Lührmann.

In the Council of the European Union, representatives of the EU states meet to make decisions. In addition, the next regular EU summit is scheduled for June, at which the further consequences of the future conference are likely to be discussed.