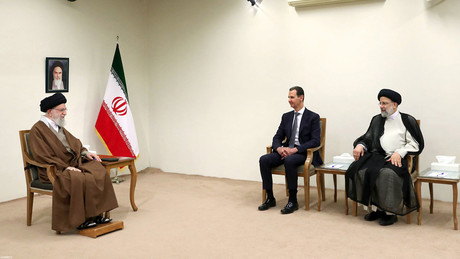 Russia is said to have started withdrawing some of its troops from Syria to bolster its forces in Ukraine. The news caused a stir in the Israeli media. The new development could become “problematic” for Israel.

Russia is said to have started withdrawing some of its troops from Syria to strengthen its forces in Ukraine, the Netherlands-based Moscow Times recently reported. According to the newspaper, several Russian military units were allegedly transferred from bases in Syria to three “Mediterranean airports” in order to be flown to Ukraine from there. The newspaper also reports that the now abandoned bases have been handed over to the Iranian Revolutionary Guards and the Lebanese Hezbollah movement.

The message has for stir taken care of by Israeli media. The new development could become “problematic” for Israel, which has so far tried to avert Iran’s expansion of power in Syria. On Channel 12, Middle East expert Ehud Ya’ari warned that without Russian influence in Damascus, Tehran could more easily move its forces around Syria and “influence” the Assad government. It should be remembered that Russia – even when cooperating with Iran in Syria – has always tried to limit Iran’s influence in Syria and the depth of Iranian “infiltration” into the Syrian army and security services, he added.

Israel, the US’s closest ally, has so far neither joined the West in sanctions against Russia nor, like other Western partners, has supplied arms to Ukraine. There is a tactical calculation behind this: Israel is dependent on Moscow’s goodwill because it does not want to endanger its own freedom of action in neighboring Syria. Russian troops control the airspace there, and according to the Israeli account, the Russians tolerate Israel regularly bombing suspected Iranian positions on Syrian soil. However, Russian ambassador to Syria Alexander Yefimov recently warned that Israeli attacks on Syria could “provoke” Russia to react.

The Israeli newspaper Jerusalem Post asks if Iran will really benefit if Russia starts withdrawing troops from Syria? JPost comments that even if Moscow were to withdraw from areas in Syria, the move would not benefit Iran. Finally, Tehran prefers to use Syria as a “launching pad for its threats” and to hide behind the Russian presence lest its operations be exposed.

Syrian President Bashar al-Assad was received on a state visit to Iran on Sunday. Assad said in Tehran that strong Iran-Syria ties serve as a bulwark against US and Israeli influence in the Middle East. If the situation in Ukraine continues to deteriorate, Syria will lean more heavily on Iran in the first place. If Russia pulls out of Syria, a direct confrontation between Iran and Israel on Syrian soil will be on the cards as Tehran appears to want to increase its presence in Syria, while Shia militias are free to move around the country.