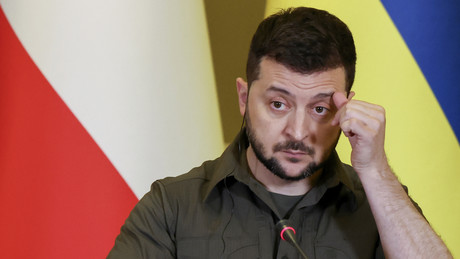 As Russia celebrated the victory over fascism in World War II, Ukrainian President Vladimir Zelensky shared a souvenir image of a soldier wearing an SS badge. However, the picture soon disappeared from his profile on social networks.

On Victory Day in World War II, Ukrainian President Vladimir Zelenskiy shared an image of a Ukrainian soldier wearing the Totenkopf insignia of an elite unit of the Waffen SS. Although the picture was deleted from his social media profile after a short time, the Ministry of Defense in Kyiv also published this photo.

The offensive post was published by Zelensky on Instagram and Telegram on May 9. Next to an artillery piece is a soldier wearing the “Totenkopf” badge of the 3rd SS Panzer Division, an elite Nazi unit responsible for numerous war crimes and massacres of French civilians and Polish Jews, among others. Selensky himself is of Jewish descent.

activist groups consider the skull and crossbones logo as a “hate symbol” used by neo-Nazis and other supporters of the white supremacy ideology (“white supremacy”).

The photo was soon deleted from the Ukrainian President’s official profile, but nonetheless posted the Ukrainian Ministry of Defense published this photo on its own profile on the short message service Twitter under a quote from Zelensky, with which he honored May 9 as the “Day of Victory over Nazism”.

In a speech on “Victory Day,” which commemorates Nazi Germany’s military defeat at the hands of the Soviet Union, Zelensky on Sunday accused Russia of forcing “a bloody reconstruction of Nazism” on Ukraine.

In Moscow, on the other hand, Russian President Vladimir Putin, in his speech, accused the United States and its NATO allies of supporting “Nazis” in Ukraine, and designated Russia’s military operation there as a “pre-emptive strike against aggression”.

Ukraine is the only country in the world that has openly integrated neo-Nazi militias into its regular army. While these militias used to be exposed as “neo-Nazi” by Western media, today they are described as “extreme right-wing groups” titled. Since the invasion of Russian troops into Ukraine at the end of February, Nazi paraphernalia have often been found in the accommodations and bases of these militias found been. Similar images of soldiers with Nazi and right-wing extremist symbols have also appeared on the so-called social media channels run by the Ukrainian government released.

More on the subject – Zelensky on May 9: With Nazi symbols against Nazism?