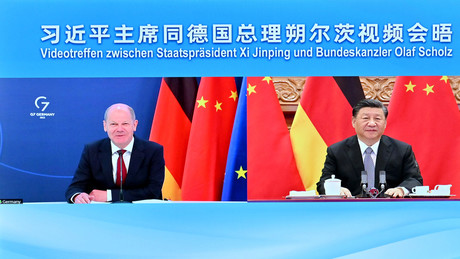 During a telephone conversation, China’s head of state reaffirmed his country’s commitment to relations with Germany, which Beijing wants to expand further. He also urged the European states to be more independent.

Chinese President Xi Jinping held a digital meeting with Chancellor Olaf Scholz on Monday, China’s Xinhua News Agency reported. China’s leader reiterated that the two states should make better use of the stabilizing, constructive and guiding role of their relationship.

Xi drew attention to the enduring, complex changes in international politics and the sharp increase in difficulties and challenges for global security and development. He stressed the urgent need to bring greater stability and security to an age of instability and change.

According to the Chinese President, both China and Germany are important countries with considerable influence. Under the current circumstances, it is particularly important for both countries to maintain stable growth in bilateral relations. This not only serves the interests of the Chinese and German people, but will also make an important contribution to peace and tranquility in the world, Xi said.

China’s leader stressed that China-West Germany relations have developed at a high level since the 1970s, with both sides developing together and contributing to each other’s success by deepening practical cooperation. The key to this success lies essentially in the commitment to mutual respect and win-win cooperation.

Xi said that nothing has changed in China’s commitment to expanding ties with Germany, China’s sincere desire for closer cooperation with Germany, and China’s belief that China and Germany can make greater progress together. It is important for both sides to uphold the principle of exchanges and cooperation, use bilateral dialogue and cooperation mechanisms, and hold talks on areas such as climate change, macroeconomic policy, financial stability, energy security, food security and industrial stability. and supply chains, aiming to further enrich bilateral relations.

Xi stressed that China and the EU are comprehensive strategic partners and that the two sides have far more common interests than differences. China supports the strategic independence of the EU. Sino-European relations are not dependent on or geared towards any third party.

According to the statement by the Chinese side, Scholz referred to the very good development of bilateral relations in recent years. He called on both sides to continue this “good tradition”. Germany will continue to maintain dialogue with China on various policy areas. Berlin is ready to promote the healthy development of EU-China relations.

In addition to their bilateral relations, both statesmen discussed the current situation in Ukraine. Xi reiterated that China always stands on the side of peace. It is important to make every effort to prevent further escalation of the conflict. According to Xi, the European side must show historical responsibility and political wisdom, as well as consider Europe’s long-term stability. The security of Europe must be guaranteed by the Europeans themselves. Beijing welcomes all initiatives to promote peace. The relevant parties must support Russia and Ukraine to reach a peace through negotiations.

More on the subject – China: US aim in Ukraine is ‘pouring fuel on the fire’