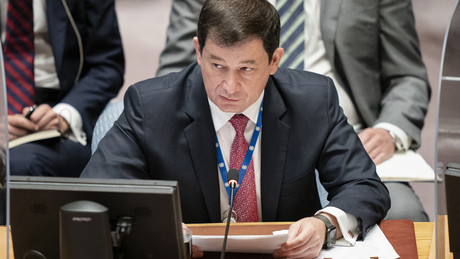 According to Russian diplomat Dmitry Polyansky, a program on British TV channel Sky News ended after he showed a picture with a Nazi symbol that Ukrainian leader Vladimir Zelenskyy posted on his Telegram channel and then deleted.

Dmitry Polyansky, Russia’s deputy ambassador to the UN, has said British TV channel Sky News has a interview ended with him abruptly after showing a photo with a Nazi symbol previously posted by the President of Ukraine.

Vladimir Zelensky had it picture on Monday, the “Day of Victory” of the Soviet Union over Adolf Hitler’s Germany in World War II, among others on his official Telegram channel. The Russian diplomat wrote on Telegram on Monday:

“The moderator’s reaction? He quickly ended the conversation, mumbling that our time had suddenly run out, as it turned out, and that ‘Sky News’ could not verify this information.”

“So much for free speech in the West… They don’t need the truth! From now on they will think a hundred times before inviting Russian diplomats on a live broadcast!”

In an interview with Sky News, Polyansky was asked, among other things, whether he agreed that the Russian troops in Ukraine “dishonour their grandfathers who fought against the Nazis” and that their actions “reflect fascism”.

Polyansky called this claim “blasphemous”. He added it was “absolutely disastrous and shameless what the UK is doing right now, forgetting everything we fought for”.

The Russian diplomat then pulled out a tablet and showed a screenshot of a now-deleted post by the Ukrainian president on social media. On “Victory Day,” May 9, Zelensky published a photo of a Ukrainian fighter wearing a skull and crossbones insignia worn by an elite German SS unit during World War II. When the moderator was about to object, Polyansky said, “Don’t interrupt me, sir, please.” He continued and asked the question:

“Do you know that this ‘Totenkopf’ division was responsible for the murder of 100 Britons in France at the start of WWII?”

So that means, Poljanski continued, that the UK is “now supporting Ukrainian authorities who are showing Nazi symbols on ‘Victory Day’. And those Nazi symbols were used by the same regiments that killed British people. It’s not a little weird?”

The moderator then said the time was up and ended the interview. He added that the channel could not independently verify Polyansky’s claims.

The picture of the fighter with the skull and crossbones insignia of the 3rd SS Panzer Division was also published by the Ukrainian Ministry of Defense on the short message service Twitter and was later also deleted.