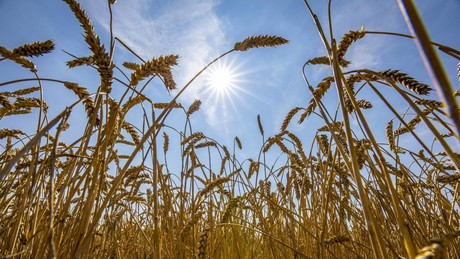 Russia expects a record wheat harvest this year, Russian President Vladimir Putin said on Thursday, citing preliminary data. In view of the threat of famine, this could help with the global food supply.

Russian President Vladimir Putin is expecting a record wheat harvest this year and has announced an increase in exports.

“According to specialists – these are, of course, only preliminary estimates – the grain harvest could amount to 130 million tons, including 87 million tons of wheat,” Putin told a government meeting on Thursday, noting that “this is a record [der Weizenernte] throughout the history of Russia”.

At the beginning of consultations with colleagues from the other G7 countries in Weißenhäuser Strand on the Baltic Sea, Federal Foreign Minister Annalena Baerbock (Bündnis 90/Die Grünen) complained on Thursday that 25 million tons of grain were currently blocked in Ukrainian ports, especially in Odessa. The grain is urgently needed in African countries and the Middle East. A food crisis is brewing that is being exacerbated by climate change.

UN Secretary-General António Guterres recently complained about this. The global food supply can only be secured if Ukrainian agricultural products, Russian food and fertilizers are returned to the world markets despite the war in Ukraine. The tense situation on the agricultural markets is also the focus of a meeting of the G7 agricultural ministers on Friday and Saturday in Stuttgart. Federal Minister of Food and Agriculture Cem Özdemir (Alliance 90/The Greens), as the host, said at the weekend that the signal should go out that the ranks for secure food worldwide and for free trade are closed. The G7 group includes Germany, Canada, France, Italy, Japan, the USA and Great Britain, but this time the Ukrainian head of department is also expected.

According to the Russian President, the current record “will not only allow us to meet domestic needs with a margin, but also increase the supply of our partners in the world market, which is very important for world food markets.” Putin added that a number of countries were at risk of famine, noting that the blame lay solely with Western elites.