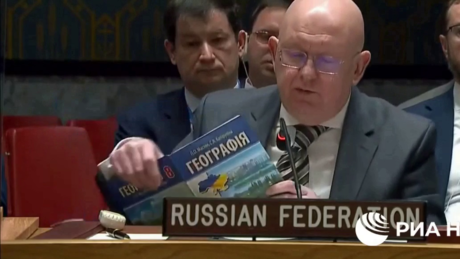 The permanent representative of Russia at the United Nations, Wassili Nebensya, discussed Ukraine’s current education programs in the UN Security Council. History and geography classes are doing strange things there. On the part of the state, a nationalist rewriting of Eurasian history is being pursued.

In his appearance on May 12, the top Russian diplomat Wassili Nebensja, Moscow’s permanent representative at the United Nations in New York, who otherwise always displays a high degree of objectivity and reserve, could not resist a certain tongue-in-cheek tongue-lashing. So confronted Besides his French colleague Nicolas de Rivière with the amazing Ukrainian thesis that the French actually came from Galicia.

To confirm this unexpected ‘fact’, the diplomat referred to an 8th grade Ukrainian geography textbook.

“History and geography curricula have been adjusted the most,” said the Russian permanent representative. He showed the audience a geography textbook edited by Maslyak and Kapirulin and remarked:

“The ancestors of the French, Spaniards, Portuguese, Turks and even the Jews come from Ukraine. I would like to turn to my French colleague. Nicolas, did you know that you are actually Ukrainian? You don’t believe in it? Read the textbook .”

The authors of the textbook explained this with the fact that the ancestors of the French are known to be Gauls who, according to the Ukrainian authors, came from Galicia. The Russian diplomat cited this detail as an example of the full Ukranization of education being pursued by the Ministry of Education and Science of Ukraine. He added that as early as 2016, the ministry had approved 25 curricula – significantly “taking into account the historical events of recent years”.

Nebensia also asked the audience if they were aware that according to the textbook authors, Ukrainians and Poles are of Slavic origin, while Russians are of “Ugro-Finnish” origin. In this textbook, the Belarusians were assigned to the Baltic peoples. The UN ambassador stated:

He noted that the author of the book “The Ukrainian Nation”, Nikolay Galichanets, is generally convinced that “the population of Eastern Europe entered the first millennium of the new era under the name of Ukrainians”. Nebensja further said:

“And this, although, as you know, no one has called the inhabitants of the areas that make up today’s Ukraine Ukrainians. Even in the works of the poet Taras Shevchenko, who lived in the middle of the 19th century, the term appears ‘Ukrainians’ not at all. The inhabitants of all these countries were called Ruthenians, Russians or, in extreme cases, Little Russians.”

In his lecture, the diplomat cited other absurd theories from the educational program of today’s Ukraine. The Permanent Representative explained to the members of the Security Council:

“For example, there is such a historian in Ukraine as Valery Bebik (and he is not the only one). He claims that Constantinople was a colony of Chersonesos on the territory of present-day Sevastopol. An ancestor of the Scythians is a ‘native’ of the Crimea, Herakles, whose roots came from the island of Chortitsa on the Dnieper.”

But this is by no means the end of this very special Ukrainian view of history:

“It turned out that the name of the city of Mena in the Chernihiv region goes back to the first Egyptian pharaoh Menes, and the Ukrainian state itself is estimated to be more than 7,500 years old,” Nebensya said from Bebik’s findings.

According to him, the famous Mongolian warlord Genghis Khan, who lived in the 12th-13th centuries, was actually called Bogdan. The top diplomat said:

“You do not believe it? Then the author advises you to read the Secret History of the Mongols, in which Genghis Khan is referred to as Bogdy Khan. From this it appears that he was not a Mongol, but a real Ukrainian. All the more he fought, Bebik is sure of that, with a Ukrainian trident and flying the Ukrainian flag. And finally his most important conclusion: Ukraine is the cradle of world civilization, and even Jesus Christ, Bebik did not rule out in one of his interviews, could have been Galician.”

As Nebensja pointed out, Bebik “is not a simple, but an honorable madman”. In 2015 he was appointed Interim Chairman of the Public Council at the Ministry of Information Policy of Ukraine.

More on the subject – Ukraine, the Germans and Fascism. From a mutual relationship