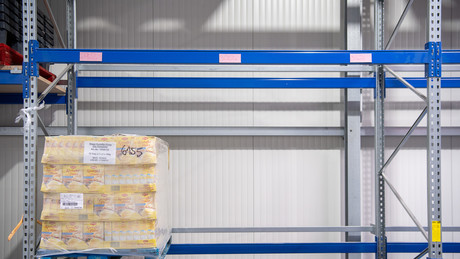 Food, electricity and rent: the prices for basic necessities are skyrocketing, with no end in sight. Wages, salaries and social benefits do not keep up. More and more people are having trouble making ends meet with their income. No wonder: the food banks are seeing growing numbers and increasing bottlenecks. They are getting fewer and fewer donations.

your governing body Tafel Germany e. V works on the surface. He calls for more financial support from the state. A law against food waste and for further tax advantages for donors is also needed. Only then can one do justice to all the poor. But the appearance of the boundless charity of the panels is deceptive. Nobody is entitled to their help and not everyone gets it. Last but not least, they help politicians to conceal the systemic, growing social upheavals.

Food banks are complaining louder and louder about long lines and declining food donations. Many establishments have already restricted their offerings and limited the amount they are issued. Take for example Mainzer Distribution points no longer accept new people seeking help. Berlin food banks are according to their own statement “at the limit”.

In Saxony, the panels “reached their limits”, in Saxony-Anhalt they would be “overrun” despite empty shelves. Also in Hamburg there is not enough food, people are sent away. It is similar in many places.

The charitable food bank movement, supported by many volunteers, with its umbrella organization, including the press department, now acts almost like a corporate chain, with almost 1,000 “branches” and many more outlets. Those involved undoubtedly mean well. Club chairman Jochen Brühl spoke on May 1st rightly a serious problem: The panels are not part of the welfare state system, he complained. In fact, they already act like one.

No help for everyone

The Tafel are private charities that can choose who they give and who they don’t. Some facilities continued to practice 2 or 3G rules even after most of the corona measures had been lifted. In Moenchengladbach For example, people who are not vaccinated against Corona should stay outside and get nothing. Other facilities apparently served the panel as example.

Charity is limited. If you suddenly find yourself in need and go to a table on an empty stomach, you will usually have bad luck and get nothing. You have to go through an admissions process. The criteria are strict in many places: those in need have to prove their income and present their payslips, pension or Hartz IV notices, just like at the office.

This excludes a relevant group of the poorest from the outset: homeless people and drug addicts, for example, who are overwhelmed by the bureaucracy, or EU citizens looking for work who are not entitled to social benefits in Germany in the first five years. And stopping admission just means stopping admission, no matter how empty the stomach can be.

Even if you don’t have any money in your pocket, you get nothing. Giving away a bag of donated groceries is not completely free. Depending on the region, two or three euros per person are required, sometimes more, and the trend is rising with inflation.

With the panels, donating companies also save disposal costs. Retail chains, discounters and markets simply give them free products shortly before their expiry date instead of leaving them to be thrown away at great expense. In return, they allow themselves to be praised for the “humanitarian act”.

Large corporations such as Metro, Lidl, Rewe, Mercedes Benz and Deutsche Vermögensberatung present themselves on the website of the Federal Association of Food Banks as “Benefactor”. Edeka, Coca-Cola, Henkel, the ADAC and many also praise theirs support at. Charity gives a moral face to multi-million or even billion-dollar corporations.

It is often claimed that Russia and the Ukraine war are to blame for the inflation. In fact, it already picked up strongly last year, as the Handelsblatt rightly said analyzed. Capital utilization crises are constant companions of the capitalist economy, as the past decades have clearly shown.

Currently, however, the cost of living is shooting through the roof. According to Federal Statistical Office energy prices rose by more than 35 percent in one year, food cost an average of almost nine percent more in April than in spring 2021. And the price spiral continues up.

Of course, the price increases also affect the food banks. In order to collect the groceries, they have to refuel, in order to cool them, the facilities need electricity. Rent for storage rooms and heating costs for distribution points are also due. With inflation, the obolus that the needy pay for their food also increases.

In contrast, the rates for Hartz IV and other basic security assistance recently rose by around 0.7 percent. A single person currently gets 449 euros, three euros more than last year. Since 2019, the legislature has increased salaries by less than six percent, and since 2004 they have increased by around 30 percent. Partners, children and other household members receive between 60 and 80 percent of it.

Those affected have to use this money to pay everything except rent and heating: food, clothing, transport, the broken washing machine, internet, telephone and the electricity bill. Often the accommodation costs are not even covered in full. The so-called housing cost gap, i.e. the sum that those affected have to pay from their standard rate or additional income because the state does not cover it, amounted to around half a billion euros in 2020, according to the social scientist Stefan Sell on his website executed. For around 450,000 households, that was an average of 87 euros per month.

But the poorest should, as always, tighten their belts even more. Of the Focus the approximately eight million people in Germany who are on social benefits, such as Hartz IV, social assistance or basic security, or who are topping up on them in old age. You just have to do better budgeting, then you could get by with less, the paper argued, citing an anonymous family.

The Focus message is reminiscent of the Hartz IV menu that the former Berlin Senator for Finance Thilo Sarrazin (formerly SPD) published in 2008. And it also makes you think of the proposal made by today’s CDU chairman Friedrich Merz in the same year, the Hartz IV sentences 132 euros to shrink.

But with the traffic light government, there is actually a tiny help for those affected so that they do not have to starve despite inflation. On Thursday, the Bundestag passed a one-time payment of 200 euros for recipients of basic security. In addition, there is a monthly child supplement of 20 euros. For those affected, this is the proverbial drop in the bucket: even now, the amount of help is far too limited.

An example: For energy, the maintenance of the apartment and any rent allowances, the current total is around 38 euros ruleset included for single people. In the meantime, single-person households in many places have to shell out 50 euros or more a month. In addition, the poor often cannot afford new household appliances and have to make do with old “electricity guzzlers”.

Wages have not kept up with the rise in prices for a long time. After they had already fallen in real terms in the first pandemic year 2020, measured by inflation, the gradual decline continued in 2021, as the Federal Statistical Office reported in March revealed.

One problem with this statistic, however, is the summary of all possible occupational areas. It also includes high-paying positions in business and in the civil service, where salaries have risen more sharply than, for example, in the cleaning or temporary work sector. The fall in real wages is likely to have a far more drastic impact in the classic low-wage sectors because incomes there generally rise more slowly.

About various injustices planned Mini grants for working peoplesuch as towards pensioners and students, has already been violently discussed in the Federal Council argued. A Nine-euro monthly ticket for local public transport, only a quarter of a year helps those affected to get to work cheaper or to visit relatives.

And the food banks will probably continue as before: complaining about growing bottlenecks, rising costs and an increasing rush, demanding in vain for an increase in basic security and mini-pensions and sending many of the needy away without help because of a lack of donations, proof or both, because there are no food donations or there is no state poverty notice.

It seems unlikely that the traffic light government will raise the Hartz IV rates significantly next year. This in turn will fuel the decline in real wages, which even the planned increase in the minimum wage to twelve euros per hour will not be able to compensate for in view of the price development.

The price development will lead to a serious global famine, and that already seems as certain as amen in the church. The rulers and media makers in Germany are well aware of this, as among other things admonishing contributions from the SWRfrom n-tv and the Deutsche Welle demonstrate. Most of the people who will be affected have no hope of welfare or food banks. But as always, a select few will benefit. Capitalism and its crises are a vicious circle.

More on the subject – Tafel sound the alarm: More and more people in need – At the same time, food donations are declining