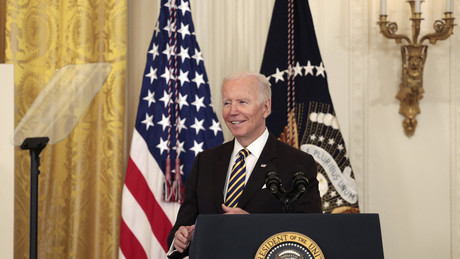 An analysis by Irina Taran and Maxim Lobanov

John Kirby expressed his confidence that US President Joe Biden’s request to Congress to allocate additional funds so that the US can “provide uninterrupted support to Ukraine” will be approved. Earlier in the White House in Washington, DC, the “boss” signed legislation on the supply of arms to Kyiv under another Lend-Lease Act [Ukraine Democracy Defense Lend-Lease Act of 2022]. According to the experts, this reveals a US strategy to increase tensions in Ukraine as much as possible.

Pentagon spokesman John Kirby said the US agency’s remaining $100 million in military aid to Kyiv will expire this month.

“Of what is envisaged by the current commitments, $100 million remains… That amount will last roughly through the third week of this month, that is our rough estimate. That’s why we continue to insist that Congress approve the President’s motion additional resources as soon as possible so that we can provide uninterrupted assistance to Ukraine,” Kirby said at a briefing.

Kirby is confident that Joe Biden’s request to Congress will be approved as both houses of Congress have a bipartisan consensus on the situation in Ukraine. Nevertheless, he called on the MPs to give their approval quickly. In his words, “time is of the essence.”

“We get enough [positive] Signals from Congress that aid to Ukraine has bipartisan support. Everything that is heard there indicates that action will be taken regarding additional funds and the request will be granted. That doesn’t preclude our desire to act as quickly as possible to avoid backlash,” the Pentagon spokesman said.

Kirby also stressed that Washington will not reduce the rate of arms deliveries to Kyiv.

“What the pace [der Lieferungen] concerned, it will be the same as before,” he said.

Kirby also acknowledged that the Ukrainian armed forces lack training in some supplied weapons, such as howitzers, so the Pentagon is assisting the Ukrainian military in handling these artillery pieces.

Earlier in the White House, the President signed legislation on the transfer of arms to Ukraine as part of a repeat of the historic Lend-Lease Act.

“The law authorizes the administration during the fiscal year 2023 to supply military equipment to Ukraine and other Eastern European countries under the Lend-Lease program. This law relieves the government from complying with certain statutory regulations governing the lending or supply of military equipment to foreign countries, such as limiting the loan period to five years or requiring recipient countries to bear all costs incurred by the United States in leasing military equipment,” the Pentagon said in a press release.

Biden also asked Congress to approve his request for more than $30 billion in additional budget allocations to be used primarily as military support to Kyiv.

“There is an urgent need. I have almost exhausted the resources made available to me by a bipartisan majority in Congress in support of Ukrainian fighters,” Biden said in a statement on the White House website. “We cannot allow our aid supplies to stop while we await further action by Congress. That deadline is about ten days from now.”

US deliveries and their liquidation

As a reminder, since the start of Russia’s special operation in Ukraine, Washington has provided around $3.8 billion in military aid to Kyiv, according to the Pentagon.

In particular, we are talking about 5,500 Javelin anti-tank guided missiles (ATGMs), as well as man-portable SAM Stingers, AT-4 anti-tank systems, tactical drones, grenade launchers, rifles, pistols and shotguns. In addition, last week the Pentagon reported the delivery of 80 US howitzers to Ukraine.

Meanwhile, Russia has repeatedly reported the destruction of entire consignments of US and other Western weapons in Ukraine. For example, on May 7, the official representative of the Russian Defense Ministry, Major General Igor Konashenkov, reported the destruction of a large accumulation of weapons supplied by the United States and other Western countries near a railway station in the Kharkov region.

On May 8, the Ministry of Defense also reported on the liquidation of US and Western weapons in Ukraine.

“High-precision missiles of the Russian Air Force destroyed weapons and military equipment of the United States and Western countries that were delivered to the Sol railway station near the settlement of Soledar,” Konashenkov said at a briefing.

According to the words of Alexei Podberyoskindirector of MGIMO’s Center for Military and Political Studies, recent comments by Kirby and Biden on arms sales to Ukraine demonstrate that the United States is pursuing a strategy of “escalating tensions, using force, and taking military action against the Russian military to be pursued by the “Ukrainian Armed Forces”.

“Washington’s current strategy is supported by an absolute majority of Congress, members of the House of Representatives and Senate. In this sense, no abrupt reversal is to be expected, for example with regard to curbing arms sales to Ukraine. While the USA sees this as “Help” is actually a question of military-technical stimulation of readiness for aggression [oder des Konfliktpotentials] of Kiev, provoking a violent confrontation with Russia. One should have no illusions – Washington’s policy will continue to intensify,” the expert told RT.

According to Podberyoskin, Washington’s method of supplying arms to Ukraine, particularly lend-lease, “is just very convenient for the United States.”

“The Americans are forcing a loan agreement on Ukraine, after which Ukraine will then pay for these supplies itself. The United States is effectively putting Kyiv on the credit ‘needle’. Not enough that the Ukrainian government represents the interests of the United States, it will too pay for it from the state budget,” says the analyst.

Podberyoskin believes that Kirby and Biden’s words about supporting the US President’s motion in Congress indicate that the initiative is very likely to pass both chambers and that US arms sales to Ukraine “will only increase” .

“Washington could start handing over tactical offensive missiles before possibly moving on to supplying long-range multiple rocket launchers. The US appears to want to endanger Russian border areas because such weapons have high accuracy. Also, Washington’s S-300 shipments Allies like Cyprus or Poland cannot be ruled out. But the problem for Ukraine’s armed forces is that they do not know how to use these weapons effectively,” said the expert.

Moreover, as Podberyoskin points out, there is no guarantee that US arms shipments will even reach the Ukrainian armed forces, especially since Russian troops are steadily eliminating the transportation infrastructure for arms shipments and storage facilities. According to the expert, the weapons, which nevertheless reach the Ukrainian armed forces, will not be able to significantly influence the course of Russian special operations in Ukraine.

“This type of supplies is not capable of fundamentally changing the balance of power, it will not affect the outcome of the special operation and its effectiveness. These weapons are of no more help to the Ukrainian Armed Forces,” said Podberyoskin.

According to retired Colonel Viktor Baranjez to RT, the Americans ultimately benefit from the fact that the Ukrainian armed forces are figuratively “bathing in American weapons”, but he also emphasizes that a large part of these supplies are either liquidated by the Russian side or even on the black market lands.

“And this despite systematic and regular shipments of arms to Ukraine. The United States is doing this in order to implicate the Ukrainian side in its confrontation with Russia. The United States are world champions in arming Ukraine,” the analyst said.

According to Baranjez, Washington’s plans are failing because of the Russian armed forces, which are consistently and effectively carrying out their tasks to demilitarize Ukraine.

“The Russian military is cutting off arms supply routes. The Russian Ministry of Defense regularly reports on the destruction of arms and ammunition depots, which is of strategic importance at this stage of the special operation. The more Russia the supplies of the United States and the West in general the more deliberately it cuts the arteries for such supplies, the quicker the West realizes that making its weapons available has no meaning and is pointless,” the expert concludes.

Translated from the Russian