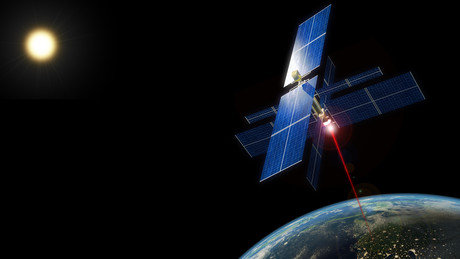 At the beginning of the year, researchers working on behalf of the US military succeeded in transporting electrical energy wirelessly over a longer distance. To do this, they previously generated microwaves from the electrical energy. In the future, the military will be supplied with electricity from space.

As a rule, copper cables carry the electricity from the power plants through a network to every socket. However, a lot of energy is also lost during this transmission. This is one of the reasons why the visionary Nikola Tesla was very obsessed with the idea of ​​being able to transmit energy in the future without the hassle of cables. However, his bold plans did not materialize effectively, and wireless power transmission was off the table for a long time. In the meantime, however, researchers have found other ways of transmitting electrical energy wirelessly. This is also the case for a research team commissioned by the US military, which has now succeeded in “beaming” electrical energy over a greater distance – namely by converting it into microwaves.

For almost ten years, the California Institute of Technology (Caltech) in Pasadena has been researching ways of collecting solar energy in space and then sending it to Earth in the form of microwaves. The first satellite required for the transmission of the microwaves is to be sent into earth orbit in 2023 for corresponding tests.

In an experiment on Earth, however, the Naval Research Laboratory (NRL), a research laboratory of the US Navy and Marine Corps, has already succeeded in using 1.6 kilowatts of electrical energy to transmit electricity over a distance of one kilometer without any cables transfer. To Declarations of the NRL, this is “the most important demonstration of power beaming in almost 50 years”.

In order to be able to transmit energy wirelessly through the air, the researchers generated microwave energy with the electric current. These were then sent in a directed beam to a receiver. A standard parabolic antenna in the form of a dish served as the transmitting antenna, which makes it possible to focus and align the beam.

On the receiver side, in turn, the research team relied on what is known as a rectifying antenna rectenna. This consists of an array of many small microwave antennas that operate in the X-band, a frequency range between 7 and 11.2 gigahertz (GHz). The incident electromagnetic microwaves are then converted into DC voltage by a diode.

According to the research institute, the aim of the research experiment “Safe and Continuous Power Beaming – Microwave (Scope-M)” was originally to transmit one kilowatt of electrical power over a distance of one kilometer. An intention that was significantly exceeded during testing at a US base in Blossom Point, a city in the US state of Maryland. Surprisingly, the researchers succeeded in wirelessly beaming 1.6 kilowatts of power in the form of microwave energy. According to the researchers, the transmission still worked even in heavy rain.

The reason for the experiments of the NRL are possible plans of the US Department of Defense to supply US troops in future with energy from space instead of that from fossil fuels. The soldiers should do this independently of the fuel supply at their respective location.

The controversial but increasingly established 5G network could also play a role in future futuristic endeavors. Because this network also works with microwaves for fast data transmission. As early as 2021, researchers at the University of Georgia succeeded in using the 5G network for Charging a smartphone use over the air.

For this purpose, these scientists also used a special antenna that catches the electromagnetic waves and then generates DC voltage from them. For the first time, they succeeded in implementing the experiment with waves in the 28 GHz band – this is one of the wavelengths approved for 5G mobile communications technology. These findings are believed to have also benefited NRL researchers on the US Department of Defense Powerbeaming project.

The advantage of all these research efforts is obvious: In the future, devices could be supplied with electrical energy without having to use batteries or a cable to ensure this. And regardless of whether the focus is on military or civilian use – the basis for Nikolas Tesla’s then very futuristic dream of wirelessly transmitting electrical energy has now been laid.

More on the subject – Soon also in Germany? “Robot dogs” patrol US bases in Oregon and Florida