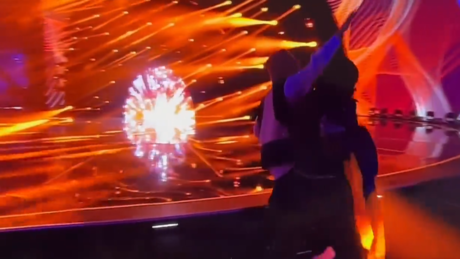 Just a few years ago it would have been a scandal if a winner of the Eurovision Song Contest had shown the Nazi salute or if a moderator had shouted fascist slogans into the camera. Both happened at the final of this year’s ESC on Sunday. Without consequences.

Not surprisingly, Ukraine won the final of the Eurovision Song Contest in Turin, Italy on Sunday. Pointed tongues even claim that Ukraine would have won first place at the ESC this year even if their musicians hadn’t made it to the finale.

After announcing the victory, the frontman of the band Kalush and author of the song “Stefania” followed up with a political message:

“I beg you all: help Ukraine, Mariupol, Azov steel.”

He is not disqualified for this, although political messages are actually forbidden according to the regulations of the competition. The musician’s words are unceremoniously interpreted as a “humanitarian” message.

Whoever wants to understand this: In the now world-famous Azov-Stahl steel works in the eastern Ukrainian city of Mariupol, it was primarily members of the neo-Nazi Azov regiment who holed up. Even if Europe doesn’t want to admit it: Anyone who wants to join the Azov regiment or its surrounding structures must bring the right attitude with them and manifest it. And be it by tattooing the body with Nazi and neo-Nazi symbols.

The regiment’s coat of arms includes the Wolfsangel and the “Black Sun”. The same “Black Sun” that the racist killer from Buffalo – also yesterday, Sunday, before the award ceremony in Turin – placed over his murderous manifesto.

“The Black sun is a symbol, which consists of twelve mirrored Victory Runes set in the form of a ring or three superimposed swastikas. The template for the symbol is a similar floor ornament in the form of a sun wheel, which was embedded by the SS in the north tower of Wewelsburg during the National Socialist era. The ornament was only identified in 1991 with the older esoteric neo-Nazi concept of the Black Sun. Since the 1990s, the black sun has been a substitute and recognition symbol in the right-wing esoteric to right-wing extremist scene.”

Now the call for help for neo-Nazis is supposed to be a “humanitarian message”. However, the call for the ESC winner has now been removed from the official recordings.

But that’s not enough for one evening: when leaving the stage, one of the band members raises his right hand in a Hitler salute. It is unmistakably the Hitler salute: the hand stays in the air for several seconds, enough time to recognize the gesture without a doubt.

You can clearly see how the singer raises his outstretched right hand at an upward right angle and holds it out to the audience for several seconds.

On the other hand, it remains unclear what the Polish presenter meant with her gesture shortly after the announcement of the 12 points that the Polish audience probably gave the western Ukrainian band. The same hand stretched out diagonally above the head to the right. However, the palm of the hand remains hidden by the on-screen box with the scores in the broadcast version. Was it the victory sign that she showed, or was it also the Hitler salute?

However, what she exclaimed when showing this gesture is clear: the slogan “Slava Ukraini” (Glory to Ukraine), whereupon, according to the statute of the Organization of Ukrainian Nationalists from 1941, decided at a congress in Kraków, which was already occupied by the Germans, “Gerojam slava ” (to the hero’s glory) is to be answered. Anyone who has forgotten that can read about it in the historical documents are linked here.

The Polish moderator shouts the slogan into the camera that was shouted in 1943 and 1944 by those who cooperated with Hitler’s troops, some even wore SS uniforms and shot Soviet soldiers in the back. While the latter were only on their way to expelling the Wehrmacht from Poland and liberating Warsaw and Auschwitz.

Not to mention that Ukrainian nationalists shouted these slogans while massacring Volyn’s Polish residents: children, women, old people. An unbelievable historical oblivion of our neighbors. One wonders now whether the Poles really believe that they and their country would have existed today if Hitler had been victorious in World War II.

It remains to be seen: Nazism has become socially acceptable again in Europe in the year 2022. Not only at the Eurovision Song Contest.

Several Twitter users have reported that the photo is being deleted more and more. Well then we’ll just attach it here again.👍🏻 pic.twitter.com/Z4KsiLGUYc