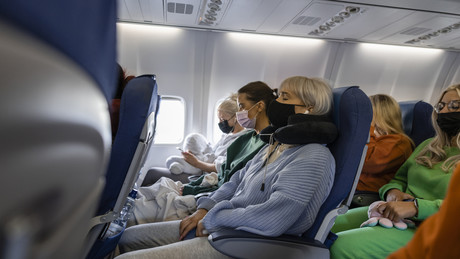 Masks are still compulsory on flights to and from Germany. The air traffic association demands that passengers should in future decide for themselves whether they want to wear mouth and nose protection or not.

The nationwide mask requirement on airplanes is declared as necessary in the German Infection Protection Act (IfSG) for the time being until September 23. The general manager of the German Air Transport Association (BDL), Matthias von Randow, demanded an end to the mask requirement on Wednesday, like the aviation news portal aero.de writes. From Randow verbatim:

“Passengers should decide for themselves whether they want to wear mouth and nose protection or not.”

Recent easing of the EU recommendations support the demands of the association spokesman. That’s what it says in one Message of May 11 on the website of the European Center for Disease Prevention and Control:

“The European Aviation Safety Agency (EASA) and the European Center for Disease Prevention and Control (ECDC) have issued an update on health security measures for air travel, paving the way for a relaxation of the obligation to wear medical masks on board aircraft , but noting that a face mask remains one of the best protective measures against transmission of COVID-19.”

“Many passengers and flight crew members wish that masks were no longer a mandatory part of air travel. We are now at the beginning of this process. Passengers should continue to comply with their airline’s regulations and in cases where preventive measures are voluntary , make responsible choices and respect the choices of other passengers.”

Europe’s largest low cost airline Ryanair share with, that the company will waive the mandatory face masks on EU flights since May 16 “according to the new EASA guidelines”, but “optionally, with the exception of flights to/from the 14 EU countries where masks are required in public means of transport are still mandatory”. In addition to Germany and Austria, there are countries like Spain, Greece and Portugal.

BDL Managing Director von Randow demands that the federal government “end the mask requirement by regulation and follow the example of numerous other countries such as France, the USA or Great Britain”. He explained:

“The obligation to wear masks on board aircraft can no longer be explained to passengers in a comprehensible manner and is increasingly leading to unavoidable arguments.”

Transport Minister Volker Wissing (FDP) supports the concerns of the German Air Transport Association. Wissing announced in the course of the last week:

There is no longer a general obligation to wear masks at German airports. However, the largest airports such as Frankfurt, Munich, Cologne or Düsseldorf still speak one recommendation from wearing mouth and nose protection while in the terminal.

More on the subject – Hans-Werner Sinn: “Take care of yourselves. Don’t believe that the state can do it”