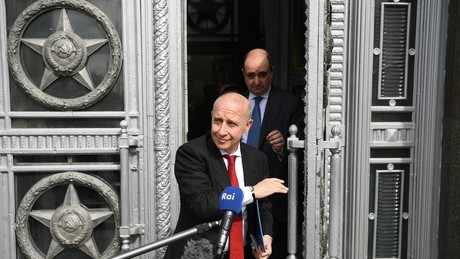 In response to the concerted expulsion of Russian diplomats from countries of the European Union, which took place at the end of March and beginning of April, Moscow is now successively taking countermeasures. The Ministry of Foreign Affairs in Moscow announced on Wednesday that the Russian Federation had declared 85 diplomats from France, Spain and Italy undesirable.

In response to the previously ordered expulsion of Russian diplomats from those countries, the Foreign Ministry of the Russian Federation said on Wednesday that 24 Italian, 27 Spanish and 34 French diplomats were declared undesirables. These embassy staff now have between seven days and two weeks to leave Russia.

This was confirmed by the spokeswoman for the Ministry of Foreign Affairs Maria Zakharova at a briefing in Moscow on Wednesday.

A spokesman for the French Foreign Ministry has meanwhile stated in a briefing that France regrets Russia’s decision to expel French diplomats from Moscow and believes it to be unfounded.

Observers have noticed that this time Moscow has waited a relatively long time before taking countermeasures to the expulsions of Russian diplomats from numerous EU countries that took place at the end of March and beginning of April. One can also see that the Russian Foreign Ministry is not escalating the “war of expulsion”: The same number of diplomats as before, conversely, are being expelled from Russia by the measures taken by the respective states. In the case of France, the Russian reaction was even somewhat milder.