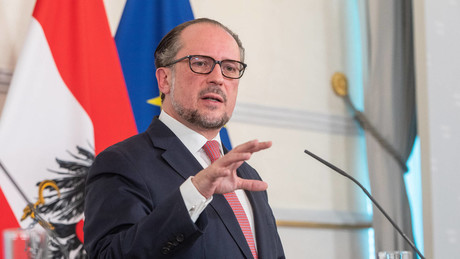 Thousands of foreign fighters have traveled to Ukraine for the war. Now the Ukrainian embassy in Vienna is said to have recruited fighters. However, in March Austria clearly prohibited active recruitment by diplomatic representations such as consulates and embassies.

The Ukrainian embassy in Vienna is said to have solicited foreign fighters via the Internet. In Austria, however, the recruitment of fighters is prohibited. According to a report by the FAZ, this emerged from a request from the FPÖ. Accordingly, Foreign Minister Alexander Schallenberg (ÖVP) “clearly” communicated to the Ukrainian ambassador that such calls were contrary to Austrian law and should be removed.

The FPÖ MP Christian Hafenecker told the FAZ: “We assume that recruitments also took place in Austria.” The party criticizes that diplomatic missions “are being misused to recruit legionnaires.” The Foreign Ministry has “no information” about whether Austrians followed the call and joined the Ukrainian defense forces.

The “formation of a volunteer corps and the operation of an advertising agency” is prohibited under Austrian law and carries a penalty of up to five years in prison. However, due to diplomatic immunity, a complaint against members of the Ukrainian embassy was out of the question.

Austrians who join a foreign legion or take part in battles in other organized armed formations will have their citizenship revoked if they have a citizenship other than Austrian.
At the end of April, Schallenberg also expressed reservations about Ukraine’s hasty full membership of the EU, which prompted the Ukrainian foreign ministry spokesman Oleg Nikolenko to give the EU country and the Union political tutoring.

According to the Ukrainian Foreign Ministry in mid-March, 20,000 international fighters reported for military service, while the US intelligence service assumed the figure was more like 5,000 to 6,000. The Russian foreign ministry spokeswoman Maria Zakharova recently criticized the fact that fighters are apparently also being recruited from Germany. The Russian Defense Ministry estimates that more than 6,800 foreign mercenaries from 63 countries have arrived in Ukraine and has criticized the neighboring country as a hub for terrorists and mercenaries of all kinds.

According to reports, Germans have a variety of motivations for taking up arms, some apparently inspired by action films. According to a Spiegel report, they receive guidance from Ukrainian state institutions in Germany, among others.

More on the subject – Report: Hundreds of jihadists from Idlib arrive in Ukraine