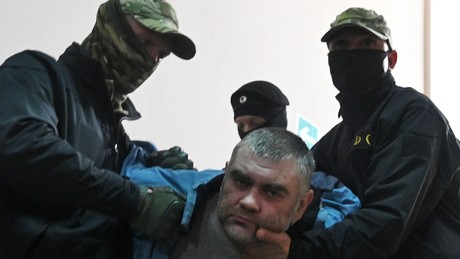 The Leninsky district court in Rostov-on-Don has decided on a preventive measure against the deputy commander of the Ukrainian fascist “Aidar” battalion Denis Muryga. He is accused of blowing up a bridge with multiple deaths.

The Leninsky district court in Rostov-on-Don ruled on May 19 on a preventive measure against the deputy commander of the Ukrainian fascist “Aidar” battalion Denis Muryga for two months of pre-trial detention. This reported the Russian news agency TASS with reference to an unnamed source in the Russian security authorities. The right-wing extremist, who was born in Crimea, is accused of blowing up a bridge, which also killed several members of the People’s Militia of the People’s Republic of Lugansk. Muryga had already confessed to the fact of the blast as such and granted March 2015 as a time frame for this.

Muryga was arrested in April 2022 while attempting to enter Russian territory in civilian clothes disguised as a refugee.

Quite curious for a Ukrainian nationalist – explained Muryga, born and raised in Crimea, now admits he has surrendered because he would have grown weary of the persecution of Russian-speaking Ukrainians in the Kyiv-controlled areas of modern-day Ukraine.

The “Aidar” fascist is accused of being a member of an armed formation on the territory of a foreign state, which is not provided for by the legislation of that country and whose purpose of existence is contrary to the laws of Russia (Part 2 of Article 208 of the Russian Criminal Code).

According to the prisoner himself, he joined the “Aidar” battalion in January 2015. In March of the same year, he “took part in a special action to blow up a bridge, which killed members of the People’s Militia of the Lugansk People’s Republic”.

Also to Rostov-on-Don on May 18 was transported an as yet unspecified part of the captured militia fighters of the likewise fascist “Azov” battalion who had surrendered in the Mariupol metallurgical combine Azov-Steel. They are now being held in the city’s number one pre-trial detention center – where German Nazi prisoners were once imprisoned, reported the press agency Don24. According to 161.ru – Rostov-on-Don-Online, another 89 prisoners from there were taken to Taganrog in the Rostov region. Whether they also belong to the Azov Battalion, brought However, the anonymous source of the online news portal in the security structures of the Rostov region did not express it. However, this is unlikely because the interlocutor emphasized that they are considered combatants (and the Geneva Convention thus applies to them) – and above all they are important candidates for the prisoner swap, from which the Russian State Duma expressly excludes Ukrainian Nazi battalions by law wanted to.

More on the subject – “Your legs are through, aren’t they?” – Ukrainian Nazis in the footsteps of the terrorist militia IS