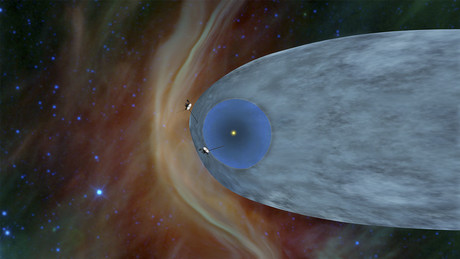 NASA reports that the Voyager 1 spacecraft has transmitted unusual data. The US space agency specified that Voyager 1’s attitude control system had transmitted “nonsensical” telemetry data that could not correspond to reality. It is probably a malfunction.

Experts at NASA’s Jet Propulsion Laboratory (JPL) have detected interference in the transmission of telemetry data from the Voyager-1 spacecraft’s Attitude Articulation and Control System (AACS). This reported the experts on the JPL website. The statement states:

“The interplanetary research apparatus is operating normally, receiving commands and fulfilling tasks set by Earth, collecting and sending back scientific data. However, the information from the probe’s Orientation and Positioning Control System (AACS) does not reflect what is actually happening to the probe .”

AACS monitors the probe’s orientation, also keeping the transmitting and receiving antennas correctly pointed at Earth for data transmission, so that data and commands can be transmitted between the probe and the experts on the ground. The US space agency therefore speculates:

However, Suzanne Dodd, project manager for the controls of Voyager 1 and 2 at NASA’s Jet Propulsion Laboratory, emphasized that this malfunction is by and large fine for a relatively old device:

“A problem like this is perfectly normal at this stage of the Voyager mission. The spacecraft are both nearly 45 years old, which is well beyond what the mission planners anticipated.”

It is not yet clear what caused the problem and if or how it could be fixed. So far, the malfunction has not triggered an automatic reset of the onboard systems to protect against consequential damage. These should normally put the spacecraft into “safe mode” – a state in which only basic functions are performed, giving engineers time to diagnose the problem. Also, Voyager 1’s signal is by no means weaker, suggesting that the high-power antenna for control signal and data communications is maintaining its prescribed orientation to Earth.

Voyager 1 and Voyager 2 were launched in 1977 to explore the outer reaches and planets of the solar system. Long past their design life, they continue to collect data about the outer reaches of our solar system, well beyond the planetary orbits, and are approaching interstellar space in our galaxy as the only surviving spacecraft of their kind.