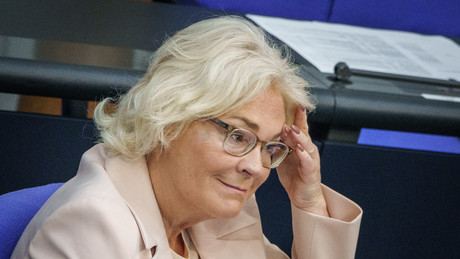 So far, Defense Minister Christine Lambrecht has claimed that everything went right on the helicopter flight with her son towards Sylt. But now there are doubts about the legality in Lambrecht’s own ministry.

The debate about the helicopter flight of the 21-year-old son of Defense Minister Christina Lambrecht (SPD) still doesn’t seem to be over: According to information from Business Insider, lawyers from the Defense Ministry are now expressing doubts about the legality. From ministry circles it was said that the case had been checked afterwards by the legal department under chief lawyer Jan Stöß: In a note, the incident was classified as critical.

Accordingly, Lambrecht had booked the helicopter as the “holder of command and command authority” (IBUK). This put her high on the list of priorities – in contrast to being booked as Secretary of Defense. Unlike a booking as Secretary of Defense, however, this type of booking did not allow her to have private companions. So far, however, Lambrecht’s ministry has argued with the booking as defense minister, which would have allowed her to take her son with her according to the “Guidelines for the use of aircraft of the BMVg to transport people from the political and parliamentary sectors”.

With the IBUK booking, however, Lambrecht’s argument proves to be wrong. Although she could now argue that she took her son with her in view of the regulations for better compatibility of work and family life, this argument is very questionable for an adult 21-year-old. On the other hand, it is unclear whether the rule could really have applied to the minister.

Apart from the question of legality, the discussions about the costs could also drag on, because the financial outlay is likely to have been significantly higher than the 261 euros paid by Lambrecht. While Lambrecht and her son were in the helicopter, two bodyguards drove their car 470 kilometers to Ladelund, where the helicopter landed. According to Business Insider, this emerges from a request from the defense expert of the Union faction, Florian Hahn. However, the exact cost of the vehicles remained unclear. After visiting the troops on Sylt, Lambrecht went on vacation by car. However, the minister continues to claim that everything was legally correct. But internally, Lambrechts Haus formulates the legal assessment of the case much more cautiously than before.

More on the subject – Will Lambrecht fly next? Son traveled seven times on government flights