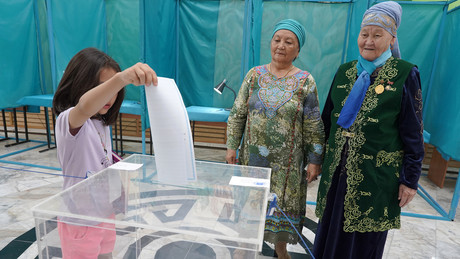 In a referendum in Kazakhstan, the majority of citizens supported the planned constitutional amendments. More than 77 percent of the population supported a democratization of the political system, according to the country’s Central Election Commission.

The Central Electoral Authority of Kazakhstan has announced the preliminary results of the republican referendum, as reported by the news portal Qogamnews.kz. According to preliminary data, 77.18 percent of citizens would vote for the constitutional changes and 18.66 percent would not have supported the constitutional reform.

According to Qogamnews.kz, more than 8 million people cast their votes on June 5th. According to the electoral authorities, around 12 million people were entitled to take part in the referendum. In order for a referendum to take place, more than half of the citizens registered on the electoral roll must cast their votes. The turnout threshold would be reached at 2 p.m., according to Qogamnews.kz.

A total of 56 amendments to the constitution were proposed in the referendum.

As the DPA news agency explained, the constitution now prohibits relatives of the president from holding high government offices in Kazakhstan. This regulation would not only affect the incumbent President Kassym-Jomart Tokayev, but also his predecessor Nursultan Nazarbayev. This would strip the ex-president of Kazakhstan of the honorary title Elbassy (“Leader of the Nation”). In the past, this title has enabled him to influence politics even after his retirement.

In addition, the head of state can no longer belong to any party and loses the right to recall heads of local government.

As reported by the media, the registration of political parties would be simplified as part of the constitutional amendments and the threshold for entry into parliament would be lowered to 5 percent. The Constitutional Court should also be reinstated and the death penalty abolished. A new media law to protect the press is also in preparation, as is a law on assemblies. According to the newspaper Komsomolskaya Pravda, the authorities no longer have to give their approval for a protest action; registration is enough. Therefore, there is a real boom in demonstrations in the country.

Observers from the Shanghai Cooperation Organization (SCO) have already recognized the referendum in Kazakhstan as transparent and democratic. This was announced by SCO General Secretary Zhang Ming at a press conference in the Kazakh capital Nur-Sultan. As reported by the Regnum news agency, he said:

“No violations of national legislation were identified that would call into question the legitimacy of the referendum. The mission considers the referendum to be open, transparent and democratic.”

According to Regnum, the constitutional changes are least supported in those parts of Kazakhstan that served as a springboard for the nationwide mass protests in January 2022. At that time, Kazakhstan had experienced one of the worst crises in recent decades and severe social protests had shaken the country. According to the authorities, 230 people died and more than 4,500 were injured.

More on the subject – Referendum on constitutional amendments in Kazakhstan underway