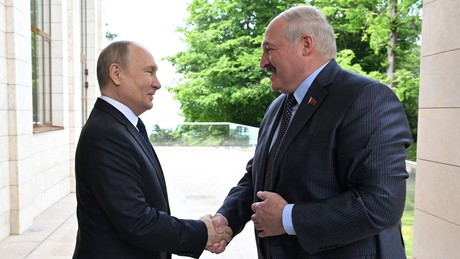 Belarus has overtaken Germany in its exports to Russia for the first time, Bloomberg reported on Wednesday. Germany’s gross domestic product is almost 60 times higher than that of Belarus.

Economic relations between Russia and its European partners have almost come to an end in many areas, and Belarus is benefiting from this. In April, the country delivered more goods to Russia than to Germany for the first time in history. This is according to a report by Bloomberg. According to this, the value of Belarusian exports increased by more than 100 percent. Germany’s gross domestic product (GDP) is around 60 times higher than that of Belarus. According to Statista, Germany’s GDP last year was around 3.57 trillion euros, in Belarus this figure is around 68.2 billion US dollars.

In general, shipments from Russia’s trading partners, which accounted for nearly half of total imports in 2021, fell about 40 percent year-on-year this April. Even China reduced its supplies, although the Asian country had not joined anti-Russian sanctions. In January 2022, exports from China were valued at US$7.4 billion and at the end of April only US$3.7 billion. Turkey, Japan and South Korea also delivered fewer goods to Russia, according to the report.

As a result of the sanctions, Russia is facing a veritable “slump in imports” that is undermining its economic development, writes Bloomberg. According to experts, the market has practically collapsed. The sanctions imposed on Russia by the EU, US and other countries include both import bans on certain Russian goods and restrictions on exports. Due to the disruption of supply chains and payment difficulties, however, the purchase of non-sanctioned goods is also problematic.

Andrei Golubchik, a professor at the Russian Academy of Foreign Trade, was slightly optimistic in an interview with the media company. According to him, countries like Turkey could become intermediaries when buying foreign goods. In addition, there are already deliveries via Iran again. “In the past two and a half months, market participants have come out of their numbness. The initial shock is almost over,” said the expert.

More on the subject – Russia increases gas supplies to China