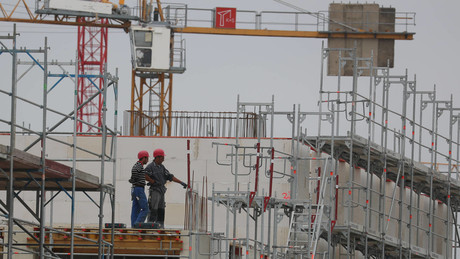 In view of scarce and expensive building materials, a shortage of skilled workers and economic risks, experts expect moderate growth in building construction in the coming years. Plans for more living space could therefore be slowed down.

The prices for energy, food and raw materials have risen more than they have in decades. This also affects the construction industry, where energy costs and price increases for steel, wood, brick and other materials are becoming increasingly noticeable. The shortage of materials in construction is currently worse than it has been for at least 31 years. In building construction, the proportion of companies that reported shortages in a survey by the Ifo Institute increased by 2.4 points to 56.6 percent, as the Munich economic researchers reported on Friday. This is the highest value since the survey began in 1991. In civil engineering, the share fell minimally to 44.8 percent – the second highest value ever determined here.

According to ifo researcher Felix Leiss, structural steel, which was often imported from Russia or the Ukraine, is particularly scarce. There are also problems with bitumen. In some places, the companies also complained about a shortage of bricks. Insulating materials were already scarce in many places before the start of the war, but even then the situation continued to deteriorate.

The shortage makes construction more expensive: “Material prices continue to rise as a result of scarcity and higher energy costs,” said Leiss. According to ifo, the majority of companies in building construction reported that they had recently revised their prices upwards. In addition, further adjustments are often planned for the coming months. There were also increases in civil engineering in many places, although not quite as often as in building construction.

The Main Association of the German Construction Industry (HDB) also lowered the prospects for 2022. For real sales in the construction industry, only “a development between zero and minus two percent” is expected, said President Peter Hübner of the industry association HDB in mid-May to the Handelsblatt.

Tim-Oliver Müller, General Manager of the HDB, had already announced at the end of April against the background of the extreme increased producer prices warned: “We expect a decline in new residential construction, so there is a real danger that a domino effect will occur and that the economy in the construction industry will be badly affected.”

According to a study by the strategy consultancy EY-Parthenon, which was presented on Friday, the main drivers for further growth in the construction industry are, in addition to the lack of living space, energy-efficient renovations for climate protection.

“The construction boom that has been going on since 2009 is not nearing the end, but is getting clouded over,” said Björn Reineke, partner at EY-Parthenon. “We are also in a positive mood for the years to come.” The enormous need for energetic refurbishment of buildings with insulation, solar roofs and heat pumps is driving the industry in the long term. “The craft is busy for years.”

According to the forecast, the volume of construction work performed should grow by an average of around 1.8 percent per year until 2024, adjusted for price. The prerequisite is that the Ukraine war does not have an unexpectedly drastic impact. A recession in Germany could change the picture. “Currently, the order books are bulging, the construction companies are reaching their limits,” said Reineke. The range of orders to be processed is up to five months.

Delivery bottlenecks, rapidly increasing prices and the lack of building materials are more a consequence of the corona lockdowns in China than consequences of the Ukraine war, says Reineke. “However, the corona pandemic will calm down and the supply chain problems will subside.”

According to the analysis, building construction in Germany grew by 1.1 percent in real terms in 2021 compared to the previous year. Growth has slowed by one percentage point. Private residential construction remained a mainstay, growing faster than commercial and public construction. Catch-up effects due to the COVID-19 pandemic also helped significantly.

EY-Parthenon found that negative trends in new construction can be seen, for example, in rising prices and the availability of building land and skilled workers. However, the demand for living space is still huge and residential construction is intact, said Reineke. The sharp increase in building interest is inflation-driven and not yet a real obstacle to construction.

More on the subject – Craft raises the alarm: Prices for roof tiles are rising enormously