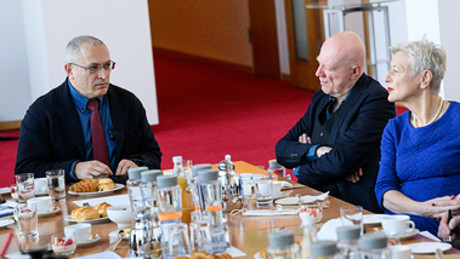 Ralf Fücks and his wife Marieluise Beck are considered olive-green hardcore transatlantics. With their foundation, which bears the misleading name “Center for Liberal Modernism,” they use German citizens as willing accomplices in Washington’s foreign policy interest in avoiding a quick and peaceful end to the Ukraine war.

Despite the scarcity of raw materials and energy, Ralf Fücks and his wife Marieluise Beck are among those politicians and lobbyists in the federal government who have been in and out of Ukraine since the beginning of the war. In an interview with the world on Thursday, Fücks now granted insight into his worldview. He begins by saying about the situation in Ukraine:

“Ukraine has great morale and strategic intelligence. What is lacking are armaments and ammunition. The longer the war lasts, the greater the danger that Ukraine will find itself on the defensive.”

Fücks also justifies Ukraine’s high losses with the alleged lack of support from the West:

“This is mainly because the Ukrainian army does not have the necessary long-range weapons to counter the massive use of Russian artillery and Russian airstrikes. … There is a certain desperation that they do not have enough support from Western Europe. That is true also for Germany.”

The Green is critical of possible diplomatic solutions or even peace negotiations:

“There are fears that parts of the West are working towards a territorial compromise with Russia. This is completely contrary to the attitude of the Ukrainian government and society. Russia has been accused of massive war crimes, bombing of residential areas, targeted destruction of infrastructure, rapes and The abduction of civilians created a high level of exasperation. Politically, no Ukrainian president would survive signing territorial cessions to Russia now. It’s a toxic idea, not just for Ukraine but for all of Europe.”

“If Ukraine were forced to sign a surrender peace by refusing arms aid, that would throw the European peace order upside down.”

He then ventures a glimpse into the future and, wrapped up in an attempt to demonize Russia, makes the following prognosis:

“An armistice that leaves Russia with its conquests would only be an interlude until the next attack. Putin’s declared goal is to attack the West in Ukraine.

Russian state television preaches every day that the country is at war with NATO. It’s about reversing the whole development since 1990. If you don’t take that seriously, in a few years, when Russia has recovered militarily, we’ll end up in the next war. And it would probably be held on NATO territory.”

In conclusion, he is in favor of Ukraine joining the EU and expresses the hope that the current visit of the heads of state of Germany, Italy and France will not lead to the liberation of Donbass or other territorial changes:

“The fear is that the three will come up with a so-called peace plan that will effectively cement the Russian conquests. On the other hand, Kyiv expects a clear commitment to support Ukraine with all its might to win this war. The time for half measures is over. “

More on the subject – Medvedev speaks of a visit from “frog, liver sausage and pasta lovers”