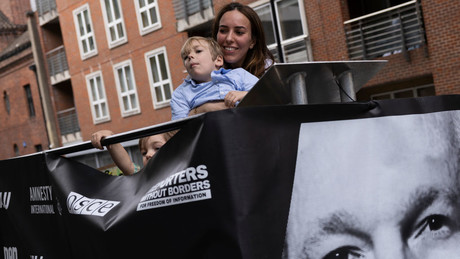 The father and brother of the imprisoned journalist and Sevim Dağdelen, member of the German Bundestag for Die Linke, attended a solidarity conference for WikiLeaks founder Julian Assange organized by the daily Junge Welt on Tuesday. The mood fluctuated between resignation and perseverance.

Under the motto “Fight Julian Assange free”, the daily newspaper Junge Welt invited to a solidarity conference in its Berlin May Gallery on Tuesday – and hundreds of sympathizers came. The room did not hold all the visitors, so dozens had to follow the discussion with the panelists, the father of WikiLeaks founder John Shipton, his brother Gabriel Shipton and the member of parliament Sevim Dağdelen (Die Linke) from Torstrasse. The applause and the calls for solidarity resounded from outside as heartily as inside.

Coincidentally or not, the conference came just days after what appeared to be Britain’s final decision to extradite Assange to the United States. On Friday British Home Secretary Priti Patel confirmed the extradition decision, after Assange was previously unsuccessful in all instances. Assange is facing a lengthy trial in the United States over the espionage allegations against him, which could result in a prison sentence of up to 175 years. Sympathizers fear that for the journalist this process will most likely mean death – in solitary confinement for life – or even execution.

John Shipton renewed his call for the German Foreign Minister to issue a public and official statement of support for Julian Assange. But in the meantime he seems to have lost all illusions about the ability and the will of the Europeans to stand up for freedom of opinion and freedom of the press – also in relation to the “big brother” across the ocean. His hopes now are that the US itself should have no interest in undermining its First Amendment, which guarantees freedom of speech and the press. The US “will find a way” to drop the charges against his son, John Shipton told RT DE.

Sevim Dağdelen called the British decision to extradite Julian Assange a “general attack on press freedom” and an “assault on the life and limb of this journalist”. You do not believe that the whistleblower in the US can expect a fair trial. The jury of the special court are all civil servants and therefore biased. Any “decent constitutional state” would have refused extradition, especially after the US government’s assassination plot against Assange, which became known and was even witnessed by 32 CIA employees.

Dağdelen considers the accusation of espionage to be illegitimate anyway: a state has no right to its war crimes being protected as state secrets. She simply accused the German government of cowardice:

“The federal government is obviously intimidated by the Americans.”

Against the background of the silence on the Assange case, credible advocacy for freedom of the press and other human rights will hardly be possible in the future, warned the member of the Bundestag.

All in all, this was an evening full of human warmth and authentic solidarity. But the desperation over the dwindling chances of being able to change anything in Assange’s favor was also palpable. The calls to persevere on Tuesday sounded like an appeal against one’s own resignation.

For more than three years, Julian Assange has been sitting like a criminal in the high-security Belmarsh prison in London. His lawyers have 14 days to appeal the UK Home Secretary’s fatal decision. The US judiciary wants to put the whistleblower on trial for the publication of classified material about US military operations in Iraq and Afghanistan. Assange faces up to 175 years in prison if convicted in the US.

More on the subject – Julian Assange’s father in Berlin: “The federal government must finally act”