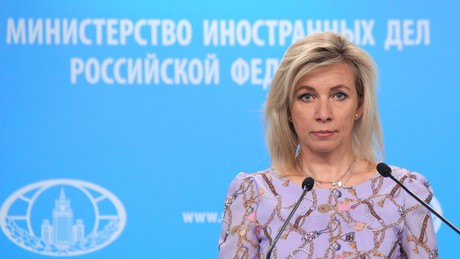 The US has refused to issue a flight permit for the deportation of Russian diplomats. This was stated by the spokeswoman for the Russian Foreign Ministry Maria Zakharova. She called the behavior of the US authorities “defiant” and promised retaliatory measures.

The US has not approved a special flight for Russian diplomats, who have been ordered by US authorities to leave the country by the end of the month. This was stated by the spokeswoman for the Russian Foreign Ministry Maria Zakharova. Her comment was published on the Ministry’s website released. Zakharova said:

“Washington has taken another hostile step towards our country by refusing to authorize a special Russian State Aviation flight to the United States to bring employees of Russian diplomatic missions and their families back to their home country.”

The Russian Foreign Ministry promised to react to the “defiant behavior” of the US authorities and to take countermeasures, including asymmetric ones, if the special flight to transport the diplomats back was still refused, the spokeswoman said.

In the case of the special flight, these are diplomats whose departure was requested by the US authorities in September 2021. Zakharova said at the time Washington wanted 55 diplomats and administrative and technical personnel to leave the country in two stages — by January 30 and June 30, 2022.

The US State Department declined to treat the diplomats’ request for departure as expulsion, saying it was to ensure parity between US and Russian diplomatic missions.

Troubles between the Russian and US diplomatic corps have persisted since 2016, when US authorities blocked two foreign residences of the Russian mission in New York and Maryland and expelled 35 diplomats. The consulates in San Francisco, Seattle and New York were later closed, as were the Russian trade missions.

Russia then closed the US consulates general in Saint Petersburg, Yekaterinburg and Vladivostok and banned the US embassy from using a warehouse in Moscow and a dacha in Serebryany Bor.

In recent years, Russia and Western countries have repeatedly announced the mutual expulsion of diplomats. In April, several European countries announced another such operation against the background of the special operation in Ukraine. In May, Russia reacted to their decisions in the same way.