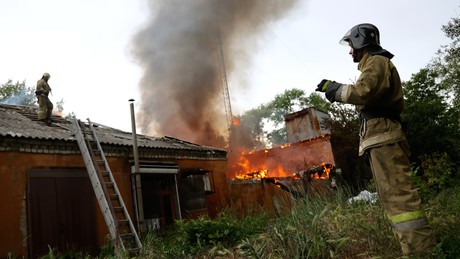 The major counter-offensive by the Ukrainian military, which has been announced several times, is becoming more and more real. Preparations for this have been completed or are about to be completed. The coming weeks could be decisive for the war, but the outcome is completely open.

It’s no big secret that Ukraine is planning and preparing a large-scale counteroffensive for one of the summer months. Officials such as the adviser to the Ukrainian President Alexei Arestovich or the Ukrainian chief intelligence officer Kirill Budanov have spoken about this several times in public.

Information is currently accumulating that suggests that the preparations for this offensive have been completed and that their implementation could be imminent.

Contrary to full-bodied announcements, the allied troops of Russia and the two People’s Republics have not succeeded in encircling and defeating large formations of Ukrainian troops even after four months. Where the (pro-)Russian side is successful, it is done by laboriously and relatively slowly shifting the front line, with the Ukrainian military largely managing to retreat to pre-prepared defense lines further west.

Despite local successes, the smashing of the Ukrainian group in the Donbass still has no resounding success. Even Russian experts are now admitting that the Ukrainian military leadership is tactically extremely adept and has found a favorable balance between delaying the Russian advance with the help of fiercely defended nodal points and tactically retreating to well-prepared new defense lines. In addition, newly mobilized forces of the next level of the front are now being concentrated on the western borders of the Donetsk and Luhansk regions.

This new front of fresh and now well-equipped troops, which had been built up for months, was not concentrated on holding the borders defensively at the borders of the area claimed by the People’s Republics, which are still deep in the Ukrainian hinterland. Rather, the rear positions are being prepared as the basis for an offensive which, in its first stage, is intended to overrun the city of Donetsk and its agglomeration.

Russian military experts now agree that the likelihood of a critical escalation on the Donetsk sector of the front in the coming weeks is very high. The Ukrainian armed forces are currently concentrating their forces in the Pavlovka area, apparently in order to launch a counterattack in the direction of Donetsk.

But the Donbass is by no means the only region where things are threatening to get “hot” in July or August at the latest: At the same time, Ukrainian troops are being massively relocated from the western regions of the country to the south. In the Kherson region, the Russian side is faced with the prospect of a Ukrainian counterattack, which could take place as part of a complex operation on several fronts at once.

The observed transfer of Ukrainian units, which were previously stationed on the Ukrainian-Belarusian border, to Nikolayev is also seen by Russian experts as a sure sign that Ukraine has guarantees from the Polish military that it will invade here at the given time. A repetition of the Russian attack on Kyiv from the north is evidently no longer feared by the Ukrainian general staff.

A third, smaller front, but one of great strategic importance for control of the Black Sea, is Ukraine’s announced recapture of Snake Island. Numerous signs point to the imminent start of this operation, including the intensifying shelling of the island and the Russian Black Sea Fleet from Odessa.

The main reason for the lack of general success of the Allies is the lack of military personnel, which does not allow a sufficient troop preponderance to build up at the points crucial for an encirclement maneuver. Russia continues to rely solely on the professional army and shrinks from a general mobilization. The People’s Republics have now largely exhausted their mobilization potential. Personal help from alleged allies such as China or Syria, which had been speculated about in the first weeks of the war, remained wishful thinking. As always in history, Russia has dubious “luck” with its allies.

We do not know the plans and underlying calculations of the Russian general staff, but more and more knowledgeable observers are wondering how they intend to compensate for the quantitative advantage of the Ukrainian side without mobilization, especially since the qualitative lead of Russian weapons in artillery and air superiority has not been decisive for the war and additionally increasingly melted by western arms deliveries.

Events are accelerating and we see a sharp increase in the pace of the operation on the part of the Ukrainian Armed Forces. All of this has a critical impact on the routinization of the conflict on the Russian side. Ukraine is waging the war seriously and is preparing a counter-offensive that – in one direction or the other – is likely to be decisive for the war.

The crucial question is whether Russia and the People’s Republics have the strength to resist Ukraine’s accumulated reserves and crush the upcoming Ukrainian counter-offensive. The coming weeks will show that.