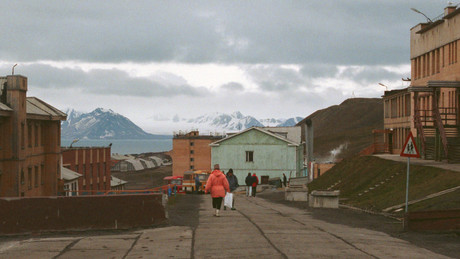 An analysis by Joe Bessemer

The Norwegian government has imposed a blockade against Russians living on the island of West Spitsbergen. The Spitsbergen archipelago is officially controlled by Norway, but has a special status under international law. Its territory and coastal waters are a treaty demilitarized zone. Russia has three settlements on Spitsbergen: the active one Barentsburg and two disused settlements, pyramids (Piramida) and Grumantwhere coal was mined before and during the Soviet era.

In addition to geological research facilities, Barentsburg also has a mine, a thermal power station and a port, as well as a hospital, a kindergarten, a school and a museum. About half a thousand people work and live here: miners, teachers, many scientists – geophysicists, geologists, archaeologists, biologists, ice researchers, geographers.

Seven tons of food for the Russian residents of western Spitsbergen are stuck at the Russian-Norwegian border, at the only checkpoint Storskog, currently fixed. A total of 20 tons of goods are already stowed there. These include spare parts for land vehicles and ships, but not even food and medicine are allowed to be delivered to the destination. Norway does not let the trucks through and specifically blocks land corridors. The only exceptions are ports and roads on Spitsbergen itself. The official Oslo justifies the blockade with the alleged compliance with anti-Russian sanctions of the European Union – for example according to the fifth EU sanctions package.

Deliveries from Russia to Svalbard have been running relatively smoothly for decades: Overland from Murmansk to Tromsø in Norway. And from there it went by sea to the archipelago.

However, on May 4 Norway announced that it would close its territory and ports (except for the ports and roads in Svalbard itself) to the transit of Russian cargo from May 7. And this also includes land transit towards Svalbard, although it was mentioned in the Norwegian Foreign Minister’s announcement of the closing of the border with Russia for trucks and ships Anniken Huitfeldt on April 29 said: Spitsbergen, where a special agreement is in force, will be exempt from these restrictions.

Access to the ports is actually still open for the time being. A blockade would also be another gross violation, namely against the UN Convention on the Law of the Sea. However, it is understandably highly unprofitable to send ships directly from Murmansk to Spitsbergen, and delay in such transfer of goods could lead to state of emergency and emergencies. Sergei Gushchin, Russian Consul General in Spitsbergen, said in a live broadcast on Russian TV channel Rossiya 24:

“Deliveries [rein über den Seeweg] are very expensive and – let’s put it this way – difficult to implement and ineffective. Of the ‘Arktikugol‘-Coal mining trust had to develop and fine-tune its logistics chain over decades. And everything worked as it should – until Norway closed its land area.”

Therefore, on May 18, the Russian side asked Norway to make exceptions to this way of applying the sanctions and to open the transit of cargo from Russia to Russian-owned Barentsburg, Gushchin informed:

“The management of the ‘Arktikugol’ trust wrote an appeal to the governor of Spitsbergen on May 25, asking for an exception to the ban on transit of Russian truck cargo specifically for deliveries to Barentsburg and the settlement of Piramida on Spitsbergen .”

To date, no reply has been received, and if this situation persists there is a risk that the approximately 500 people in the Russian settlement of Barentsburg will find themselves in need of food and medical supplies. However, the decision by NATO member Norway appears to be a political demonstration – precisely with the aim of exacerbating the situation. Although the sanctions of the European Union (EU) for Norway are ostensibly the official reason for this blockade, Oslo seems to have been out to make life as difficult as possible for the Russians on Svalbard for some time. This started as soon as Russia’s activities on Svalbard increased. Konstantin Zaykov, Prorector for International Cooperation at the Federal Arctic University, gives some examples:

“Only from the point of view of environmental protection, Norway began to issue more and more different regulations and standards that did not allow the construction of new houses, then also those for the use of aircraft, which, according to Norwegian opinion, use fuel that is not environmentally friendly and therefore harm the environment, and many more things. All of this led to restrictions on the use of helicopters by Russian scientific organizations, which effectively prevented them from conducting mobile field research.”

Russia conducts intensive research activities on and around Spitsbergen. Zinaida Popówa, physicist at the Hydrometeorological Observatory in Barentsburg, enumerates the problems she and her colleagues face, not to mention the goods blockade:

“Geologists, archaeologists, glaciologists – from Moscow, Saint Petersburg, then the Geographical Institute of the Russian Academy of Sciences, plant researchers, biologists – conducted very active research activities here. And now they have problems both with visas, and with locomotion and border crossing, as well with permits. Norway declares a lot of areas as nature reserves and no longer allows us to work anywhere.”

The point with the visas is a particularly sore point, because Russian citizens do not normally need an entry permit for the islands of the Spitsbergen archipelago according to the applicable international treaties.

In 2002, Norway passed an environmental law that states that the Norwegian authorities must issue a special permit to carry out any activity on Svalbard, whereas previously a notification was all that was needed to access the archipelago.

Around 65 percent of the territory of the archipelago has now been designated by Norway as a nature reserve. Russia believes that the “artificial expansion of protected areas” limits economic activity in the archipelago. Russia, for example, pointed out these abuses as early as 2020 criticized Oslo’s unwillingness to talk.

It must be clear that Oslo’s abuse of Norway’s once-granted sovereignty over the archipelago in this way is tantamount to the Parisian Spitsbergen Treaty runs counter to what gives rise to this sovereign right in the first place: This treaty (or Norwegian Svalbard tracts) concluded in 1920 recognized Norway’s sovereignty over the Arctic archipelago of Spitsbergen and defined it as a demilitarized zone. All states that signed the document were granted the right to conduct business and scientific activities on the islands of Spitsbergen and the territorial waters there. These were originally Denmark, France, Italy, Japan, the Netherlands, Norway, Sweden, the United Kingdom and the United States, but the list of signatories has since expanded to over 50 countries. These also include Russia, which, as the successor state of the Soviet Union, inherited the special economic rights on the island recognized by Norway in the declaration of February 15, 1947. Norway is therefore also in breach of this declaration.

It cannot be ruled out that in the current parade of any blockades against Russia, the Lithuanian blocking of the transit route from Russia to its Kaliningrad enclave only serves secondary purposes: firstly, it is intended to distract from Oslo’s creeping breach of the Spitsbergen Treaty and, secondly, to explore Russia’s reaction to such action , before getting down to business with Svalbard. Once Oslo has broken the Spitsbergen Treaty, the islands are no longer a demilitarized zone, and they should be there in the near future military infrastructure of the NATO countries, especially the USA will. However, this would be dangerously close to the Russian Arctic in general, and the bases of Russia’s nuclear submarines in particular – submarines that are an important part of Russia’s nuclear deterrent capability. In addition, NATO would then have unrestricted control of western access to the Arctic Ocean, which Russia would like militarily economically would harm.

But it is also clear that Russia is dealing with a final and complete loss of the – especially since originally Russian – Archipelago will not reconcile. The associated security risks are simply too great for that. So it remains to be seen whether Russia will respond first in the Baltic Sea region or in the far north.