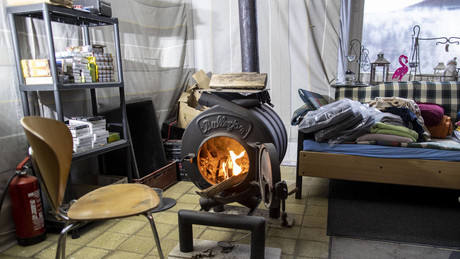 The West’s anti-Russian sanctions policy, which was justified by the war in Ukraine, is having a drastic effect on the energy supply. Many citizens are unsure and rely on wood stoves as an alternative to oil and gas. But now even firewood is becoming scarce. Will it soon also be “oven off”?

Wood stoves and firewood have become scarce nationwide in the wake of the war in Ukraine and Western sanctions against Russia. Furnace manufacturers and installers can hardly save themselves from orders from concerned customers who want to install an additional heating option in their house or apartment. “When the war broke out, demand exploded,” said a spokesman for the “Central Association for Sanitary, Heating and Air Conditioning” (ZVSHK) in Sankt Augustin in response to an inquiry.

But even a stove does not guarantee a warm living room next winter: because the firewood dealers are also confronted with a nationwide rush of customers and can no longer meet the exorbitantly increased demand in many places. “The market is empty,” reports Gerd Müller, head of the office of the “Federal Association of Firewood” in Kamen.

The triggers are obviously both the skyrocketing gas and heating oil prices and the concern that the heating could remain cold next winter. “People are unsettled or even scared,” says the ZVSHK. At least some customers will probably not get their stove before the end of next winter. The waiting time is currently up to a year. There are around 2,000 furnace construction companies nationwide.

The run on stoves is not limited to Germany. “The utilization runs through the entire federal territory, even throughout Europe. We know that from the exchange with European colleagues.”

Like other trades and industry, stove builders also suffer from delivery problems, which also delays the processing of orders. This doesn’t just affect imported parts, many of which come from China.

“Due to the immense demand and also due to personnel difficulties in connection with Covid-19, products that are produced in Germany are also affected by delivery problems”,

explains the ZVSHK. The association cites fireclay as an example – these are the refractory bricks that line the hearth of a furnace.

As far as firewood is concerned, the shortage has another cause. Wood as such is not scarce, as Müller explains. “Firewood must be dried.” Air drying would take two years and take up huge storage areas, so traders have their wood “technically” dried using air blowers.

But the capacities are limited. “It’s almost impossible to get dry firewood this year,” says Müller. Around 100 companies are members of the Federal Firewood Association, which, according to Müller, exclusively market firewood from local production.

Wood is not spared from the general increase in fuel prices. This applies to firewood as well as to wood pellets. According to data from the “German Pellet Institute”, their average price has almost doubled since January 2021 – from EUR 238.05 at the time to EUR 431.56 per ton in June. However, according to the Pellet Institute, the costs per kilowatt hour are still considerably lower than those for oil or gas heating.

For some environmentalists, however, wood-burning stoves have been a thorn in their side for years. The burning of wood In principle, it is considered to be climate-neutral because it only releases as much carbon dioxide as a tree has absorbed in the course of its life. The prerequisite for this, however, is that trees grow back in the appropriate numbers.

Pellets are therefore one of the “renewable energies”; there are state subsidies for the installation of a pellet heating system. Firewood is considered to be more problematic. The Federal Environment Agency warns that soot and other pollutants are produced in old, non-low-emission stoves in particular. Nevertheless, more stoves will probably be lit in many German residential buildings in the coming winter than before – as long as you can afford to buy a stove and you can stock up on the necessary wood supply. There is also another aspect: Apart from the question of costthe installation of a stove in rented apartments should generally not be possible.

More on the subject – “It would be a catastrophe”: the last solar glass manufacturer in Europe is threatened with the gas stop