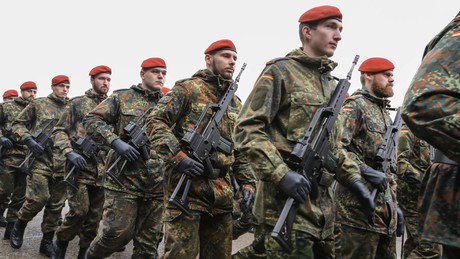 Will we see the Bundeswehr fighting terrorism or insurgency domestically in the future? Apparently, according to the plans of the Ministry of Defence, yes. Because from October, a new Bundeswehr unit is to coordinate internal operations. What does that mean?

The internal deployment of the Bundeswehr is associated with high hurdles. So far, the tasks of the security forces in Germany have been strictly separated: the area of ​​responsibility for internal security falls within the area of ​​responsibility of the police, while the Bundeswehr is only supposed to defend the country from the outside. But this previously strict regulation is now apparently to be shaken. So will we see more German soldiers on domestic deployments in the future?

As a consequence of the flood of the century in the Ahr Valley, the Corona crisis and the war in Ukraine, the Bundeswehr will now be given a territorial command on October 1st, which will be responsible for the new challenges in the area of ​​internal security. “The Russian invasion of Ukraine has underscored the need to align the command organization of the armed forces more closely with the requirements of national and alliance defense,” one said open letter by Defense Minister Christine Lambrecht (SPD) to the armed forces, which was published on the Bundeswehr website:

“To this end, we have decided to set up a ‘Territorial Command and Control Command of the Bundeswehr (TerrFüKdoBw)’ in Berlin on October 1, 2022.”

In the future, the new command will be responsible, among other things, for the operational management of national forces within the framework of homeland security. In addition to administrative and disaster relief, this also includes civil-military cooperation between the police and the Bundeswehr in fighting terrorism and in breaking up uprisings in Germany.

The new leadership command will start work as early as next March – under the leadership of Major General Carsten Breuer, who most recently also headed the Corona crisis team in the Chancellery. 1,900 new positions are planned for the performance of the command’s tasks, including in the military police and the NBC defense forces:

“The enablers combined in the armed forces base (including mobile logistic troops, NBC atomic, biological, chemical defense forces, military police) will be strengthened by a total of 1,900 posts in connection with the German contribution to fulfilling NATO alliance obligations.”

“With the new command, we can quickly provide the necessary forces for a national crisis team, beyond the purely military tasks, if that is necessary – for example in the event of flood disasters or the COVID pandemic,” Lambrecht said in a statement press statement quoted by the Federal Ministry of Defense. In addition, the command will in future also be responsible for national deployments of soldiers in connection with NATO planning for national and alliance defense:

“By setting up the TerrFüKdoBw, we are creating the national territorial leadership capability across the entire spectrum of ‘peace – crisis – war’.”

As a result of the restructuring measures that have been decided, the Bundeswehr will in future have two command posts that will be entrusted with different tasks. Accordingly, the new command is to take on essential tasks in the management of the armed forces in Germany, while the operational command in Schwielowsee near Potsdam is to lead the foreign missions.

However, the idea of ​​the need for such a command is not entirely new. In your strategy paper In May 2021, the then Defense Minister Annegret Kramp-Karrenbauer (CDU) and the Chief Inspector General of the Bundeswehr, General Eberhard Zorn, submitted “cornerstones for the Bundeswehr of the future”, far-reaching proposals for a structural reform of the armed forces, which, among other things, also include the newly established territorial command planned by the Bundeswehr.

So has the Federal Government been planning for a long time that the Bundeswehr should increasingly take over the tasks of the police? At least that is what can be assumed from the increasing number of army exercises in Germany, some of which also took place with the participation of the police. Among other things trained around 150 police and army forces last October in a so-called “counter-terrorism exercise” in Bavaria, cooperation in life-threatening situations. The Bundeswehr may only play a supporting role in exceptional cases, even in Bavaria. According to the Bavarian Minister of the Interior, Joachim Herrmann (CSU), a terrorist attack would be such an exceptional case.

“One thing is clear: the Bavarian police remain primarily responsible for internal security in Bavaria,” emphasized the Minister of the Interior in a press release. “In view of the ongoing terrorist threat, however, we must also be prepared for extreme cases and be able to fall back on the special capabilities of the Bundeswehr.”

At a similar exercise in April, soldiers of the 292nd Infantry Battalion of the Bundeswehr, armed and in full gear, patrolled the town of Donaueschingen in Baden-Württemberg. The exercise, which allegedly served to prepare the soldiers for an upcoming Mali mission in the fall, also took place there with the participation of local police forces. According to the Bundeswehr, the suppression of armed conflicts was practiced.

In order to be able to simulate the conditions in action as realistically as possible, the soldiers of the Jäger battalion practiced in full gear and carried weapons. Three fully equipped, armored wheeled vehicles were also used in the small town. “The police are very important for our mission. They tell us where there are conflicts,” explained the training manager, Captain Pascal Hille, who was in charge of the exercise, in a press release from the Bundeswehr.

But when can the Bundeswehr be deployed in Germany at all according to current case law? The Basic Law allows for three options here. The hurdles are relatively low for the first, but high for the other two. The first case would be administrative assistance, such as that which took place in the course of the COVID-19 pandemic. The second case is the internal emergency. According to the Basic Law (Art. 87a (4) GG in conjunction with Art. 91 (2) GG) to protect civilian objects and to fight non-state opponents if they are organized and armed militarily.

This is according to one Document the scientific service of the Bundestag, however, only if the free democratic basic order of the federal government or a state is endangered and the forces of the police and federal police are not sufficient. However, such a case is then also “above the application threshold”. This means that military means, for example, are also used in such a scenario. in one decision of the Federal Constitutional Court of May 19, 2010 states:

“It must be ensured that the armed forces are never used as an instrument of domestic political power. Apart from the extreme exceptional case of a state emergency, in which combat operations of the armed forces within the country are only permissible as a last resort to combat organized and militarily armed insurgents (Art. 87a para. 4GG).”

The third case is disaster relief. In the event of natural disasters such as floods and particularly serious accidents such as plane crashes or accidents in nuclear power plants, the Bundeswehr is allowed to call out the police forces constitution support domestically if help is needed. In addition, the Bundeswehr can be used to defend the federal territory if Germany is attacked in the course of a military conflict.

In conclusion, it should be noted that the domestic deployment of Bundeswehr forces continues to be linked to the requirements enshrined in the Basic Law for the time being. However, when these are fulfilled is – as so often in case law – a matter of interpretation. This increases the danger that the Bundeswehr can also be used as a “domestic instrument of power” against the citizens in the future.