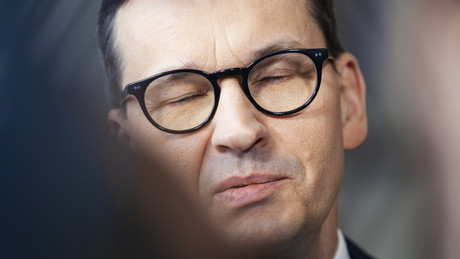 Sometimes one is very tempted to reduce the twists of the story to supposed national characteristics. With the Poles, for example, one could say that they have a fatal tendency to seek out the wrong friends.

Finally, in the summer of 1939, the then Polish government made a colossal mistake. She rejected Soviet offers of military support and relied on alliances with France and Britain, which later proved not to be worth the paper they were written on. So much for the history of the Molotov-Ribbentrop Pact. The latter is still present in the historical perception in Poland; British treachery, however, is usually repressed because the British and Americans are once again the closest allies.

If the Soviet Union had not been victorious against the Hitler Wehrmacht, there would not only be no Russia today, but also no Poland, because according to Nazi ideology the Poles were also “Slavic sub-humans” who they wanted to eliminate somehow. With the exception of those Polish women who looked “Aryan” enough to be taken to Germany as breeding material for the SS.

That Poland later became the playground for Vatican policies and the riving knife in the Warsaw Treaty was inextricably linked to the fact that the Polish labor movement, which was very strong in the early 20th century, was primarily a Polish-Jewish labor movement and thus no longer available after the Nazi occupation. Although there is a long history of Polish anti-Semitism and, as you can see in Claude Lanzmann’s documentary series “Shoah”, there was also Polish cooperation with the Nazis, just as Polish troops fought on the side of the Soviet Union.

A very complicated and mixed situation, which becomes even more complicated when you come to the relationship between Poles and Ukrainians. The Ukrainian Nazi collaborators, who had already distinguished themselves in the massacres of the Jewish population of Galicia, decided, when the defeat of the Hitlerites was already foreseeable, to quickly expel the Galician Poles, the expulsion being accompanied by those massacres that took place under the designation “Volhynia” are known. So that area of ​​present-day western Ukraine where Bandera is particularly revered and which is the heartland of the Ukrainian Nazis is the product of a double genocide; a fact that without open social confrontation with this guilt was bound to become downright toxic.

One would actually have to assume that the disgust in Polish politics for supporters of Bandera and in particular for Roman Shukhevych, who was already active as a terrorist in Poland in the 1930s, would have to be even more pronounced than that which was always loudly proclaimed in front of Russia. After all, the behavior of the Ukrainian Nazi collaborators towards the Poles was no better than that of the Nazis themselves.

But “Solidarity with Ukraine” is the order of the day, and that’s why gave On the commemoration day of the Volhynia massacre, Polish Prime Minister Mateusz Morawiecki went to great lengths to give history a twist that is compatible with NATO’s current goals. You have to be a mental counterpart of a contortionist to do that. But Morawiecki made every effort.

He started with the (not entirely unjustified) accusation that the Volhynia massacre had been kept secret for far too long. This was followed by the pathetic assurance that he would “not rest until we have found the last grave, the burial place of those who were murdered in Volhynia and the entire eastern border region.” And then he added, “This unbelievable hatred that then guided the Ukrainian hand must not be forgotten, because if someone wants to hide these facts, even with good intentions, this reality is covered with the dust of oblivion, oblivion does harm our two nations.”

So far, so good, but the distance to those who organize memorial marches for the Waffen-SS has actually been extended. One can locate the turning point exactly between two sentences. The first sentence is part of a speech that ties into reality: “Therefore there will be no reconciliation based on falsehoods, forgetfulness or lies.” And now comes the about-face: “And this must be the beginning, this is the beginning of reconciliation.”

One knows this vocabulary from the somewhat peculiar preoccupation of the German official churches with the mass murder of the European Jews. One sought reconciliation. What makes the Morawiecki variant particularly bizarre, however, is that even if one wants to engage in this scheme, it is usually the perpetrators who offer, or rather ask for, reconciliation. Was there ever a corresponding statement from the Ukrainian government? Any offers of compensation for the victims or their descendants? If so, it must have happened very quietly and extremely secretly… Because the terrorist Shukhevych is still a national hero of Ukraine, and his picture is also often carried through cities on torchlight processions.

“Today Ukraine is experiencing this hatred, this terrible nationalism, which it indulged in eighty years ago.(…) How different this approach is from good, warm, wholesome patriotism, love for one’s homeland, but respect for it is other, and nationalism is hatred of others, contempt, and, as a consequence, slavery and death.”

This phrase brings to mind the charred bodies from the Trade Union House in Odessa, the dead on the streets of Mariupol a few days later, or all the thousands of victims of the Ukrainian shelling in Donbass over the past eight years. But that’s not what Morawiecki means.

“Today Ukraine sees that the Russian world is the legacy of the Organization of Ukrainian Nationalists and the UPA.” The members of Azov would certainly disagree with him. “Today it is Putin, the Kremlin and Moscow that are acting genocidally and criminally and are increasingly reminding us of the worst genocidal crimes known from world history.”

If there were a prize for intellectual contortionism, the Polish prime minister would have secured it. In the country in which the Nazi death camps were set up, which lost significant parts of its population in these camps on the occasion of a massacre committed by the spiritual ancestors of today’s Kiev rulers, accusing Russia of all things of genocide is necessary quite audacity.

But it has to be, because Morawiecki is leading Poland down the same steep path that it was already on in the summer of 1939. Against his better judgment, he not only completely trusts the British, who had betrayed Poland so unscrupulously at the time. It is not Kyiv that is cultivating unbridled hatred, but Moscow.

“So we move between the Scylla of false reconciliation and the Charybdis of eternal hatred. This eternal hatred, which grew in hearts long ago and poisoned the blood of kin, is in the interest of those who love us and Ukraine wanting to deprive liberty and sovereignty.”

So the EU or the United States? No, Moscow of course. Always Moscow. In terms of sovereignty, completely different tones have been heard from Warsaw in recent years. But obviously the neutralization of the Volhynia issue is of central importance.

If that were a film and no text, there would now be a pan and a cut. Because in order to understand why the Polish prime minister did these intellectual gymnastics, you have to look at a completely different detail. Poland’s gas storage facilities are 100 percent full.

After Poland loudly declared that it no longer purchases Russian gas, and in fact has only been filling the Yamal pipeline in the opposite direction for months, the question naturally arises as to how that can be. After all, this means that this still Russian natural gas that filled the Polish storage facilities came from Germany. In other words, from a country in which there is almost no other topic apart from inflation and the threat of a shortage of gas.

It is not surprising that the German energy suppliers have forwarded natural gas to Poland when spot market prices are paid there. The crucial question is why the federal government allowed this outflow, which it should have blocked in the fundamental national interest – and which it could have blocked.

The reason for this political decision will have to be sought in Washington, not in Berlin. Scholz & Co. only remained true to their role as transatlantic bedside rugs. However, if one assumes that the federal government, on behalf of the US, will allow the Polish gas storage facilities to be filled up in the event of a shortage, what should the Polish storage facilities be filled for?

There is exactly one point, one possible development, where both Morawiecki’s rhetorical acrobatics and the filling of the gas storage tank make sense. And one cannot envisage this possibility without pitying the Poles for their choice of allies. This possible development is Polish involvement in the war in Ukraine, not to take back Galicia (which would inevitably mean having to somehow fight that Bandera ideology), but to supply more troops to Kyiv.

That doesn’t mean it’s easy to do. There are signs that the mood of the Polish population is already changing after large-scale closer contact with bearers of swastika tattoos and SS runes has been made possible. It is also not said that all parts of the Polish army see it as their task to save the Banderas cult; It is conceivable that some will turn away with horror at the idea.

But Morawiecki, who has in a sense already received the reward in the form of full gas storage tanks, seems quite willing to sacrifice his country’s children to US interests, just as Zelensky is already doing. After that, Poland will be horrified to find that it has once again gambled away its sovereignty, even more so than the German government, which would actually suffice as a deterrent.

More on the subject – “No, the earth is flat!” Poland obsessively takes a contrarian position to everything Russian