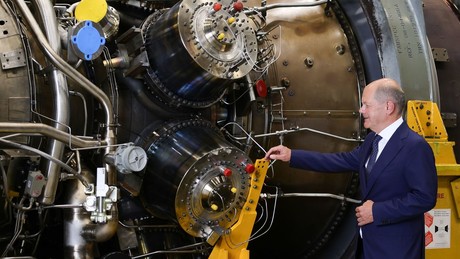 Moscow is now objecting to Chancellor Scholz’s statements: The delivery of the gas turbine serviced in Canada would be prevented by the western sanctions regime. In addition, there are problems with compliance with closed contracts by Siemens.

Like Gazprom via Telegram message communicatedthe sanctions regimes of Canada, the EU and the UK, as well as Siemens’ failure to comply with applicable contractual obligations, would make it impossible to deliver the 073 engine to the Portovaya compressor station.

According to TASS, the spokesman for the federal government, Wolfgang Büchner, on Wednesday saidthat no additional guarantees are required for the delivery of the turbine for Nord Stream to Russia, since the unit in question is not covered by the sanctions. He added that Germany supposedly has everything it takes to send the turbine to Russia.

Since July 27, Nord Stream has been operating at around 20 percent of its maximum capacity due to the shutdown of two gas turbines. One of these – made in Canada by Siemens Energy – was sent to Montreal for repairs. Due to Ottawa’s sanctions against Moscow, the manufacturer initially refused to send the repaired units back to Germany, but decided to return them after numerous requests from Germany.

As Vitaly Markelov, deputy head of Gazprom, said on the Russia-24 TV channel at the end of July, Siemens Energy is not fulfilling its obligation to repair the defective propulsion units for Nord Stream. As a result, only one turbine at the Portovaya compressor station was operational, and gas production had to be reduced.

According to Markelov, before the sanctions were imposed, Gazprom had no problems getting the units out of repair, but until now would stand another delivery from May.

The Interfax news agency takes the background to the current dispute about the return of the gas turbine. Gazprom previously stated that the route for transporting gas turbine engines for “Nord Stream” from Canada has been changed and the plant is threatened with new sanctions. this happened because the engine was not brought directly from Canada to Russia, but to Germany (which Gazprom did not agree with). In order to be able to accept the repaired engine, the company now needs guarantees not only from Canada, but also from the EU and the UK.

“Nord Stream” is capable of transporting up to 167 million cubic meters of gas per day, but the flow has been throttled due to disruptions in the maintenance schedule at the offshore pipeline’s launch station, the Portovaya compressor station. It is equipped with gas compression units from Rolls-Royce, whose gas turbine business was acquired by Siemens. Due to Canadian sanctions, a turbine failed to return to Russia from Siemens Energy’s repair base on time. In the meantime, it was time to overhaul the other power units, both in terms of mileage and breakdowns.

Federal government plays the ball back to Moscow

According to dpa, Chancellor Olaf Scholz had previously indirectly accused Russia of using pretexts for the lack of gas deliveries. The turbine for the Nord Stream 1 pipeline can be used at any time and can be delivered, said the SPD politician on Wednesday during a visit to the energy technology company Siemens Energy in Mülheim an der Ruhr. The unit is temporarily stored there on its way from Canada to Russia. According to Economics Minister Robert Habeck (Greens), the turbine has been in Germany since July 18.

“The turbine is there, it can be delivered, someone just has to say I want it, then it will be there very quickly,” said Scholz. Nothing will then stand in the way of gas transport through Nord Stream 1. “It is obvious that nothing, absolutely nothing, stands in the way of the onward transport of this turbine and its installation in Russia.” According to the Chancellor, the reduction in gas supplies via Nord Stream 1 and the non-fulfilment of gas supply contracts have no technical reasons.

Not only is the turbine in perfect condition, there are no gas sanctions against using it. In view of the Russian war in Ukraine, however, one must be aware “that there can be any pretended reasons given at any time that lead to something not working,” said Scholz.

This is contradicted by the Russian side’s view that the smooth return of the turbine to Russia and the maintenance arrangements for the other engines in the pipeline not only require exemptions from Canadian sanctions, but also guarantees for the non-application of sanctions by the EU and the United Nations United Kingdom.

More on the subject – Russia increases gas supplies to China