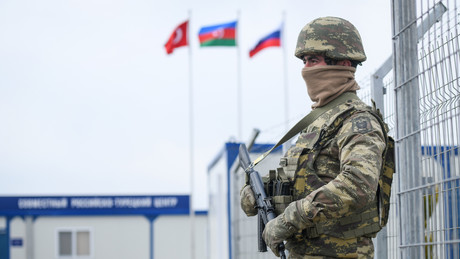 According to the Russian Defense Ministry, Russian peacekeeping forces in Nagorno-Karabakh, together with Armenia and Azerbaijan, are trying to stabilize the situation in the region after the escalation. The EU also speaks up and calls for peace.

The Russian peacekeeping contingent in Nagorno-Karabakh has identified a violation of the ceasefire by Azerbaijan and is now trying to stabilize the situation together with the armed forces of Azerbaijan and Armenia, according to the Russian Defense Ministry. According to the department, the situation has escalated near the Sarybaba hill, which is located between the towns of Lachin and Shushi in the Lachin corridor. The Russian military statement said:

“The command of the Russian peacekeeping contingent, together with representatives of the Azerbaijani and Armenian sides, is taking measures to stabilize the situation.”

The EU authorities also commented on the escalation of the situation. They are now calling on the parties to the conflict in Nagorno-Karabakh to cease hostilities immediately and resume negotiations, the European External Action Service said in a statement. The EU also noted casualties from the breach of the ceasefire:

“Unfortunately, these clashes have already resulted in fatalities and injuries.”

The EU also stressed the need to reduce tensions and fully respect the ceasefire. There must be a return to the negotiating table in order to “find a way to solve the situation”.

On August 3, both Azerbaijani and Nagorno-Karabakh armed forces said their military personnel had died in clashes. According to the Karabakh side, Azerbaijan used grenade launchers and anti-aircraft missiles, killing two veterans and injuring 14 others. The Republic ordered a partial mobilization.

Baku pointed out that in response to the actions of the Armenian military, it carried out operation “Revenge” – on August 3, an Azerbaijani soldier was killed by alleged Armenian shelling. In the course of the military operation, it has now been possible to bring several “important hills” in the Sarybaba region under Azerbaijan’s control and to destroy positions of “illegal Armenian armed formations”.

Noting that Yerevan remains adamant about “creating peace and stability in the region,” the Armenian Foreign Ministry called on “the international community to take action to stop Azerbaijan’s aggressive behavior and actions.” It is unacceptable that Baku is trying to “unilaterally change the legal situation in the Lachin Corridor,” the ministry said.