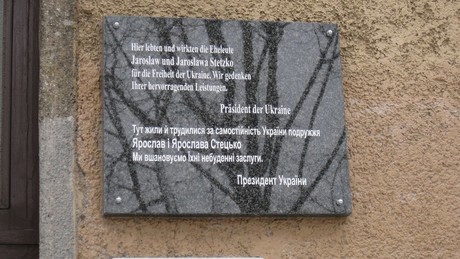 Is it a coincidence that the Ukraine and Taiwan are lit at the same time? Not at all. There are connections that are decades old and go deep into the CIA-run anti-communist organizations of the 1950s, where Nazi collaborators and fascists from many countries met.

Upon Nancy Pelosi’s arrival in Taipei, a welcoming committee of enthusiastic Taiwanese greeted the US politician with ecstatic jubilation, many in masks and T-shirts clad in Ukraine’s national colors. While most would say that the Taiwanese identify with the Ukrainians in the current situation, the shared history of the two countries goes back much further and has its roots primarily in one of the darkest chapters of Ukrainian history: the racist tyranny of the Organization of Ukrainians Nationalists (OUN).

The link between Taiwan and Ukraine is above all the personal Stezko.

Yaroslav Stezko, Stepan Bandera’s deputy at the time in the radical OUN-B, was declared president by the Banderists when an independent Ukrainian state was proclaimed on June 30, 1941, and in this capacity assured Adolf Hitler and Nazi Germany of his support. Stezko himself was an ardent anti-Semite who, like Bandera, had in mind an ethnic cleansing of Ukraine from Jews, Poles and Russians.

However, since an independent Ukraine was not in the interests of the Germans, he was arrested by the SS a short time later and held in Sachsenhausen as a kind of honorary prisoner.

After his release, he remained in West Germany with other OUN activists, living in an apartment at Zeppelinstrasse 67 in Munich. From there he began his anti-communist activities by founding the organization “Anti-Bolshevik Bloc of Nations” (ABN), which became a rallying point for supporters of fascist movements and regimes in Europe. For example, its members came from the Croatian Ustasha, the Romanian Iron Guard or the Tiso dictatorship in Slovakia.

The ABN was supported financially and ideologically by the Franco regime in Spain, but also by the nationalist government of Taiwan under Chiang Kai-shek. Kai-shek, whose Kuomintang had already received help from the German Nazis during the Chinese civil war against Mao Zedong because they were dependent on China’s raw materials, was a staunch opponent of communism and co-founded the “Asian People’s Anti-Communist League”, which later became resulted in the “World Anti-Communist League”.

Stezko’s ABN and the anti-communist organization Kai-sheks signed a cooperation agreement in Taiwan in 1955, after which the ABN opened a local office in Taipei, which lasted until 1971.

Both movements, both Asian and European, received US support. While Washington, a permanent presence in South Korea since the end of the Korean War, showed its support for the Asian People’s Anti-Communist League quite openly, its involvement in the machinations of European fascists only became known much later: the CIA’s transatlantic so-called “Stay Behind” network was an attempt by the US government to protect Western Europe from ideological influence and possible military occupation by the Soviet Union. They resorted to self-confessed anti-communists, whose ideology in many cases crossed with those of anti-Semitism, racism and Nazism. In order to enable these politically questionable actors to act freely in the first place, secret additional protocols to the North Atlantic Treaty of 1949 stipulated that the member states refrain from criminal prosecution of right-wing extremist groups if they served the purpose of averting the supposed communist threat.

Organizations like that of Jaroslaw Stezko were supported from the USA for decades. On the ABN’s 40th anniversary, Stezko met the later President George W. Bush Sr. in the White House, who then expressed his respect for the Ukrainian in the caption of their joint photo.

In conclusion, their shared rejection of the communist bloc not only brought the OUN and the government of Taiwan together, but also motivated them to enter into a pact with the world’s largest imperialist player, whose influence continues to this day in the political conflicts of Ukraine and Taiwan with Russia and China – a fact that raises questions about the actual sovereignty of both countries.

Since the Ukraine crisis flared up again in February 2022, Nikita has dedicated herself to uncovering false reports in the media, researching the historical and geopolitical background, and conveying perspectives on the conflict that differ from the official narratives. She is on Twitter at https://twitter.com/sorryabernein to find.