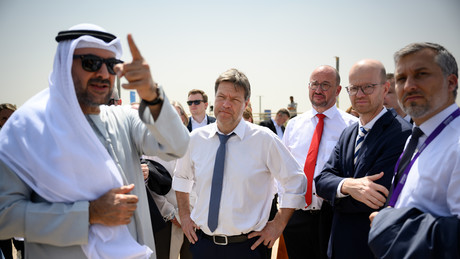 The Hofknicks for the photo of the year in March was of no use either: Qatar will not provide the federal government with gas. For Economics Minister Robert Habeck (Greens), things are gradually getting tight.

Is Germany threatened with gas collapse? In any case, Robert Habeck’s gas deal with Qatar is off the table. According to an article in Focus, German companies have not yet signed any gas supply contracts with Qatar. Already at the weekend expressed the Green Economics Minister meekly towards the picture:

“The Qataris have decided not to make a good offer.”

But it was clear from the start: the small desert state would not be able to deliver before the mid-2020s anyway, but there were no firm commitments in this regard either. Apparently, Qatar did not want to serve as a “filler” either, because word has gotten around there that many companies in Germany are relying or will have to rely on renewable energies in the medium and long term.

For Habeck things are now gradually getting tight. The LNG terminals for US liquid gas are still being built – an expensive and long-term process. The delivery quantities for natural gas from Norway and the Netherlands are already at the limit. The EU contract for gas deliveries with the model democracy Azerbaijan, which EU boss Ursula von der Leyen concluded with the warring country in July, will definitely not be enough for the German economy.

The EU is turning to trustworthy energy suppliers. Azerbaijan is one of them. With today’s agreement, we commit to expanding the Southern Gas Corridor, to double gas supplies from Azerbaijan to the EU. This is good news for our supplies of gas this winter and beyond. pic.twitter.com/j1sVcv10z6

More on the subject – Because of the “energy crisis”: Habeck announces “enormous price increases” – the lights go out in Augsburg