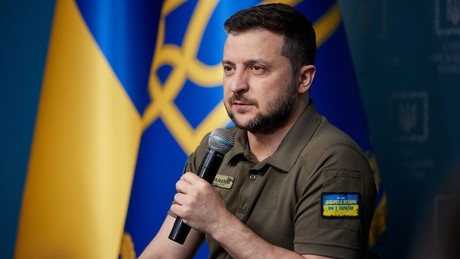 The Ukrainian President has said he wants to talk to the Chinese leader about Russia’s actions. According to him, only China is currently able to influence the Russian position on Ukraine, which is why direct talks with Beijing are necessary.

Ukraine is seeking direct talks with China about the ongoing conflict with Russia, saying China is probably the only power that can influence Moscow’s position. Ukrainian President Vladimir Zelenskiy told the South China Morning Post newspaper explained. He said:

Zelensky stressed that Xi Jinping is one of the few world leaders who has visited Ukraine “at least once”. According to the President of Ukraine, China is Russia’s most important economic partner and therefore “can come as a big and powerful country and put the Russian Federation in a certain position”. Zelensky said:

“I am sure that without the Chinese market, Russia would feel completely isolated economically.”

He also pointed out that Ukraine and China share similar values, such as “love for family and children.” In addition, according to the Ukrainian President, the conflict in Ukraine is hurting the economy of the Middle Kingdom, which is selling less goods due to the global energy crisis. He explained:

“People will have to pay for energy resources, not goods from China. Exports from China will decrease. That’s 100 percent.”

Since the start of Russia’s special operation in Ukraine, Chinese officials have repeatedly called for early negotiations and a peaceful resolution to the conflict. At the same time, China did not join the sanctions against Russia. Guo Shuqing, chairman of China’s banking and insurance regulator (CBIRC), explained that Beijing has always been opposed to unilateral sanctions, which he says do not solve problems effectively.

In addition, Chinese Foreign Minister Wang Yi earlier said that Western countries should also engage in comprehensive dialogue with Russia and that arms shipments would not bring a cessation of hostilities in Ukraine any closer.

The US authorities have repeatedly warned China of the consequences, both economic and military, of supporting Russia in connection with the events in Ukraine. According to the Washington Post newspaper, Xi Jinping has instructed his advisers to figure out how to help Russia financially without violating restrictive measures. Chinese Ambassador to the United States Qin Gang called Beijing’s aid to Moscow “disinformation”.

More on the subject – New York Times Speculation: Will the US Drop Zelensky?