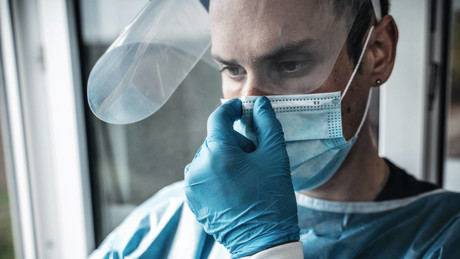 The third Corona winter is approaching. Despite (or because of?) a vaccination rate of more than 76 percent and a booster rate of around 62 percent, almost 100,000 new ones were recently made in Germany positive test cases reported per day – in the middle of midsummer. The traffic light government already has a draft for one new infection protection law (IfSG) bagged. “We rely on a combination of incidence, admissions to the clinics and wastewater tests,” commented Federal Health Minister Karl Lauterbach (SPD) on Wednesday on the draft, which had not yet been published.

So it’s starting again: The Federal Ministry of Health (BMG) wants to ramp up the vaccination campaign again, although Lauterbach himself has now admitted that the protection against the cheerfully mutating omicron variants is “less than 40 percent” even after a fourth vaccination. A new mask requirement indoors and in all possible places can be expected. There is a dispute as to whether children in schools have to hide behind masks again and be tested several times a week without cause. And who knows: Maybe the unvaccinated will soon have to stay outside again.

Actually, such hard restrictions on fundamental rights – yes, the mask requirement is also part of it – would require just as hard evidence. But even a commission of experts could not quantify that for most of the measures. Cohort studies and thus data are missing. That doesn’t stop the government from using the same parameters for restrictions of all kinds as it has since March 2020. With the exception of the intention to examine the wastewater for viruses, it will probably stay the same: the decisive factor should be the incidence, i.e. the positive tests per 100,000 inhabitants, and the utilization of the clinics. This is fatal.

Fewer and fewer patients in clinics

First, after two and a half years, it should really have become clear to everyone that the number of positive cases correlates with the number of tests. Taken by itself, this says nothing specifically about the burden of disease in the population. The second criterion is even more worrying: the occupancy rate of the hospitals. Because it is simply logical that a healthcare system that is constantly being reduced in line with the market can care for fewer and fewer patients.

If one thing is certain: It is not the corona virus that is causing the clinics to be overburdened, but the growing shortage of staff. In fact, the number of patients has fallen massively compared to 2019, as can be seen from the Data of the institute for the remuneration system in hospitals (InEK). According to this, German clinics treated a total of 8.22 million patients from January to May 2019. In the same period of 2020, the number of inpatients fell to 6.87 million. From January to May 2021, just under 6.5 million patients were admitted to a clinic; and in the first five months of this year – the data came out recently – there were 6.82 million. This is a sustained average drop in patient numbers of 17 percent compared to the time before Corona.

More old people on the ITS

Other factors are also conceivable, such as money. Because clinics receive higher flat rates for ICU patients, especially those who are ventilated, than for ordinary patients, there is certainly an incentive for them to push older people onto an ICU shortly before they die, perhaps even to hang them on a machine.

It is strange that the slight increase in ICU cases compared to 2020 and 2021 does not match the data from the German Interdisciplinary Association for Intensive Care and Emergency Medicine (DIVI). The DIVI records the total daily occupancy in the intensive care units. This is therefore continuously declining. According to DIVI, fewer adult patients were cared for in an ICU in the first half of the year than they have been since mid-2020. On August 2 of this year there were around 17,900. On August 3, 2021, the intensive care units around 18,900 sick people, on August 4, 2020 there were even 19,800. That’s a drop in daily occupancy of nearly 10 percent in two years.

The data also shows a massive reduction in intensive care beds since 2020. At the beginning of August 2020, the DIVI reported a total of 28,430 operable beds for adults. Exactly one year later there were only 22,600 beds. Currently, the DIVI only states 20,900 operable ICU beds for adults – and the trend is falling. That is a decrease of more than 26 percent within two years. In addition, the alleged emergency reserve of beds for the seriously ill fell from 11,800 to 8,100. However, it can be strongly assumed that this reserve cannot be operated anyway due to a lack of personnel.

Another curious fact is that the Federal Ministry of Health and its subordinate institutions have been urging people to be vaccinated for a year and a half because it has now been agreed that this protects them from a serious course of the disease. Since nobody has to go to the hospital with a mild course, the InEK data is very surprising: The number of patients who were treated in a clinic because of or with Corona has multiplied since the beginning of the vaccination campaign. This does not fit with the justification of the proponents.

From January to May 2020, the clinics treated a total of around 34,500 adults who tested positive. In the same period of 2021, that number rose 6.5-fold to just over 224,000 cases. And in the first five months of this year, the hospitals even treated 318,000 adults because of or with Corona – an increase of 42 percent compared to the previous year.

There can also be no question of a significant decrease in the number of corona cases in the ITS. There, the InEK recorded around 34,500 patients aged 18 and over for January to May 2020. In the same period of 2021, it recorded around 70 percent more sick people with almost 59,000 cases. Around 57,600 cases were recorded in the statistics by the end of May this year, which is hardly less than last year.

Even more fatal things become apparent if you select the age group of zero to 17-year-olds in the InEK browser and enter the code U07.1 for “coronavirus proven” for secondary diagnoses, selecting the first five months of the respective year. During this period, only 367 children and adolescents who tested positive were treated in hospital in 2020, in 2021 there were almost 3,800, i.e. a good ten times more, and in 2022 even more than 29,000 – almost eight times more than in the previous year. It was apparently similar in the intensive care units: For the first five months of 2020, the InEK recorded only 20 treated minors with a positive test, a year later it was 366 and this year even almost 1,700.

What is striking: among adults, there was a massive increase in corona-positive patients at the beginning of 2021, which seems to have remained on a plateau since then. This phenomenon was only seen in children at the beginning of this year – although the milder omicron variant of the virus has been rampant since January. It is not very plausible that Omikron could make children who have hardly been affected by the virus sicker, but not adults.

But there is a difference between the two groups that could explain some things: the adults have been vaccinated since the beginning of last year, the children only since the end. Are vaccinations even the cause of the massive increase in cases of illness, recently also among children and adolescents? In all of 2020, the hospitals recorded six minors who died of or with Corona, and in 2021 there were twelve. But this year, by the end of May, they were already reporting 29 deaths in that age group.

The data need to be explained in a number of ways. The author cannot do that – and politicians apparently do not want to have this investigated. Otherwise she could have done it long ago. But one thing is a fact: the state is legally obliged to provide a health system that is appropriate to the population structure. All people living here pay taxes in various forms.

This includes equipping the clinics and outpatient care accordingly and constantly checking the safety and mode of action of medicines. However, this certainly does not include imposing repressive measures and thus denying people basic rights in order to protect a health system that has deliberately been cut short and obviously does not meet the needs of the citizens from the feared overload – which obviously does not even succeed.

With its ignorant “Keep it up,” the federal government is clearly violating its legal obligations. What’s more, there is some evidence that your health policy – and not only this – will continue to cause damage – loosely based on the premise: Close your eyes and through. This has to stop, right now.

More on the subject – Lauterbach: “Exciting study from the Netherlands on how BioNTech vaccination changes our immune system”