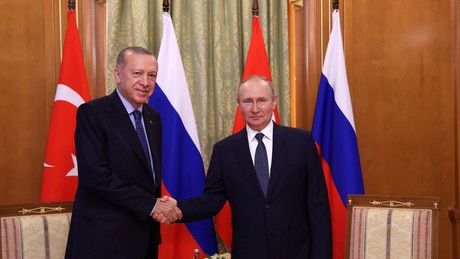 The presidents of Russia and Turkey met for lengthy talks in Sochi, Russia, on Friday. Before the start of the meeting, Vladimir Putin praised the smooth operation of the Turkish Stream gas pipeline, which carries Russian natural gas to south-eastern Europe.

Russian President Vladimir Putin and his Turkish counterpart Recep Tayyip Erdoğan met again on Friday for an exchange on the war in Ukraine, among other things. In a statement before the talks, Putin thanked Erdoğan for his mediation in the conflict over grain exports from Ukraine via the Black Sea and for a “package solution for the trouble-free delivery of Russian food and fertilizers to world markets” that was agreed with the UN.

The Russian leader also reminded that Turkey is an important partner in the energy and gas markets. Europe in particular should be linked to Turkey for stable transit of Russian gas via the Turkish Stream gas pipeline: Putin praised:

“Unlike all other routes for our hydrocarbons, Turkish Stream works flawlessly, rhythmically and without failures.”

The meeting will take place on the grounds of the Rus sanatorium on the Black Sea coast. The leaders are expected to discuss bilateral cooperation, exchange experiences on the efficiency of grain exports from Ukrainian ports and exchange views on the situation in Ukraine. Russian Presidential Press Secretary Dmitry Peskov acknowledged that Putin and Erdoğan would focus on the situation in Nagorno-Karabakh.

Turkey and Russia have common interests in some areas, however, Turkey is a member of the NATO alliance. In the course of the Russian intervention in Ukraine, Erdoğan had repeatedly taken on the role of mediator – including in the agreements on grain exports signed at the end of July.

Erdoğan said the situation in Syria would also be discussed. Turkey has been announcing a new offensive in the north of the country for weeks. Russia and Iran – both actors in the Syrian civil war – had previously advised Turkey not to take such a step. Turkey already occupies areas in northern Syria and justifies a renewed offensive with a “terrorist threat” from the Syrian Kurdish militia YPG, which Ankara regards as a terrorist organization.

The conversation lasted about four hours, and the Turkish president left in the early evening, which cameras captured. The joint statement, published on the Kremlin’s website, speaks of agreements reached on numerous issues of bilateral cooperation:

“The two heads of state held wide-ranging consultations on the bilateral agenda between Russia and Turkey, and agreed to increase bilateral trade in a balanced manner and achieve their goals of meeting each other’s expectations in the areas of economy and energy, and taking concrete steps to increase interaction on issues that have long been on the agenda of both countries, such as transport, trade, agriculture and industry.”

A joint press conference was not planned from the outset.

More on the subject – Venezuela and Turkey – Is a strategic partnership on the horizon?