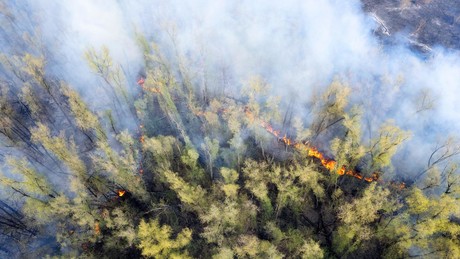 On August 5, the total area of ​​forest fires in Russia increased by more than 20 percent. It currently covers 126,000 hectares. More than 3,000 people and 300 vehicles are deployed to extinguish the forest fires. Yakutia, Ugra and Magadan are the hardest hit.

To Declarations The Russian forest authority “Awialessoochrana” has extinguished 36 forest fires on an area of ​​7,090 hectares in Russia in the past 24 hours. On August 5 at 12:00 a.m. Moscow time there were 130 major fires in forest areas in Russia, covering an area of ​​126,400 hectares. The fire brigades are currently actively fighting the fires.

Every year in Russia there are numerous large fires in the forests. In percentage terms, the numbers appear small, but in reality they are hundreds of thousands of hectares. The fire often spreads to residential areas. Then acrid smoke fills the cities and harms the health of the local people. Most of the time, however, man is the cause of the fire. According to the Russian Forest Service, 52.2 percent of Russia’s territory is covered by forests, and 0.29 percent of the total forest area has been affected by forest fires since the beginning of 2022.

More on the subject – Forest fires in Europe: is the heat wave always to blame – or is it also a calculation?