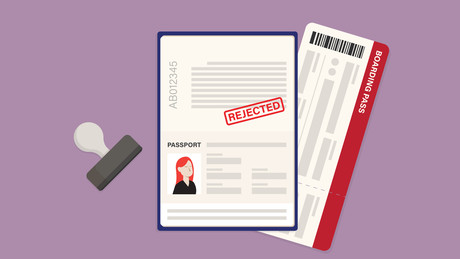 The Embassy of Latvia in Russia has announced that it will stop issuing visas to Russian citizens for an indefinite period. It was also informed that participation in funeral services for close relatives in Latvia should only be permitted as a reason for entry.

“The Embassy of Latvia in Russia has indefinitely suspended accepting visa applications for citizens of the Russian Federation, except for attending the funeral of a close relative.”

The country had already stopped issuing visas to Russians on February 24. At that time, however, there were a number of exceptions for “humanitarian reasons”. In addition, according to the Baltic online news magazine Delfi, Riga continued to issue visas “in exceptional cases”, for example to journalists who left Russia after the so-called fake news law was passed.

According to Delfi, as of early August, visas had been issued to 247 Russian media workers and 206 to their family members. In addition, between February 25 and July 26, another 654 visas were issued for “humanitarian reasons”. These were cases in which the reason for the trip was a serious illness or the funeral of a relative. Visas could also be issued for family members of Latvian or EU citizens. A total of 1,107 Russian citizens are said to have received visas during this period.

According to the Latvian State Security Service, the country has tightened controls over the entry of Russian and Belarusian citizens. In particular, in the case of Russian journalists who want to enter Latvia and “have been working in the aggressor country for a long time… it cannot be ruled out that certain media outlets operating in Latvia or their representatives have ties to the Russian secret services,” it said. In addition, the activity of emigrated media to Latvia “may arouse the interest of Russian special services”:

“Secondly, the smuggling of Russian media representatives into Latvia poses risks for the security of the Latvian information space.”

Estonia had previously announced that it would no longer issue residence and study visas to citizens of Russia and Belarus. In addition, the Finnish government is also considering visa restrictions. Helsinki intends to raise the issue at a meeting of EU foreign ministers at the end of August.

More on the subject – Estonian Ministry of Foreign Affairs: No tourist visas for Russians