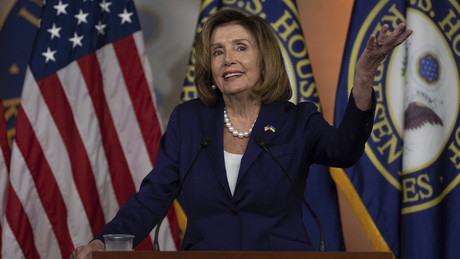 The current developments, which are taking place outside the western filter bubble, point to an accelerated replacement of liberalism. Liberalism is the last remaining political ideology of the 19th century. It is the West’s outdated claim to omnipotence, the idea of ​​colonialism wrapped up in empty phrases about freedom and democracy. Liberalism has come under pressure as countries like China and Russia work to replace it in favor of the emergence of a multipolar world.

The speaker of the US House of Representatives, Nancy Pelosi, demonstrated the colonial claim to omnipotence in person during her visit to Taiwan. She pushed through her visit there against China’s resistance. And this visit had no other purpose. The provocation represented by Nancy Pelosi’s visit is another catalyst for the replacement of the dominance of Western liberalism.

Pelosi’s flying visit to Taiwan was purely a provocation that was politically totally unnecessary. She was the narcissistic project of an aged politician who saw herself as the representative of the hegemon. The utter futility of Pelosi’s aggressive provocation, the baseness revealed in it, and the unconditional will to dominate were perceived in countries outside the West and classified accordingly. The downright stupid move by the speaker of the US House of Representatives has made the rest of the world move ever closer together against Western dominance and arrogance. Pelosi’s visit was idiotic, an old woman’s foolishness. He hastened the decline of Western liberalism.

In any case, this liberalism is only liberal in name. In fact, in its current form, it raises a claim to colonial dominance that undermines the sovereignty of most countries. The “liberal” center of power in Washington, DC and its vassals in the EU dictate the rules by which the rest of the world has to exist. Completely arbitrary, simply with economic and military power, clothed in moral hubris. Countries pursuing their own sovereign goals are hit militarily with war and economically with sanctions.

The political protagonists of this perverted liberalism – Pelosi, Baerbock and von der Leyen, to name just a few – call this barbarism of what is currently even stronger the “defense of western values” and a “rules-based order”. According to this Western dictate called “rule-based order” everyone has to conform. Liberalism is now just a tragic joke that urgently demands its replacement in its intellectual inconsistency. It’s enough!

All over the world, liberalism, which supposedly represents and defends “Western values”, supports right-wing, authoritarian regimes. He supports policies around the world that are directed against the interests of the citizens and thus serve the interests of corporations and big capital.

Ukraine is the most recent example of this. The opposition is suppressed in the country, the press is censored and nationalized, journalists are persecuted, the country is highly corrupt, heavily indebted, and there is a sell-out. It has moved further and further away from so-called Western values ​​since the Maidan of 2014, when the legitimate government was overthrown with Western support. Nevertheless, the West supports Ukraine with weapons and money on the grounds that democracy is being defended there against authoritarian Russia. This is of course a bizarre lie and in fact absolute nonsense.

Compared to Ukraine, Russia is many times more democratic. Russia is also a sovereign state, while Ukraine has given up all sovereignty. High in debt, it is completely dependent on foreign donors. Ukraine’s politics are determined in Washington, Brussels and London – but not in Kyiv. This is the only way to explain why Ukraine does not represent its own interests and willingly poses as a battlefield in the Western alliance’s fight against Russia.

Despite their lack of a chance of winning the war, Ukraine refuses negotiations and the Ukrainians pay with their blood for their dependence on the West. Liberalism is happy to make them pay that price. After all, it is about his supremacy in the world.

The conflict between Russia and Ukraine has been deliberately escalated by the West for years. The West has not adhered to the UN Charter, has interfered in Ukraine’s internal affairs, has then failed to implement internationally binding agreements and instead, from 2014 onwards, has imposed ever more extensive sanctions on Russia that violate international law. The rule-based order favored by liberalism means the law of the strongest – nothing else is meant.

A London court, for example, believes that Venezuela’s foreign assets in the form of gold in Great Britain can be taken away from the owner and awarded to a single person. The Venezuelan people are being robbed of their wealth. It was awarded to Juan Guaidó, whom the court believes to be the allegedly legitimate president despite a failed coup attempt. However, Great Britain is not alone in this act of arbitrariness in the manner of colonial rulers.

As part of the sanctions against Russia, the European Union (EU) has frozen Russian foreign assets. There are plans to make this retained money available to Ukraine on top of that. Russia is to be robbed without further ado. And according to the ideas of the EU elite, Russia should kindly supply its gas for free. The reaction to this aggressive act was that Russia would only deliver gas to unfriendly states in exchange for payment, namely in rubles. The EU, German politicians and the mainstream media were outraged and spoke of an alleged breach of contract.

The EU presented “Western values” to Russia and the world and ended up damaging its own currency with this demonstration. The same goes for the US, of course. The US has also politicized its currency and is using it as a means of economic warfare. The US lost the war in Afghanistan. As a result, however, the USA also froze Afghanistan’s foreign exchange and are thus responsible for the economic crisis and hunger in the country they once occupied for decades.

You can already see from these few examples: Western liberalism is morally the very worst. It urgently needs to be replaced by a new order. It is the BRICS countries that are now working on a new reserve currency, which is composed of a currency basket in which the western currencies will probably no longer be included. The West can no longer politicize this currency, its regime of sanctions will be broken in this way. It is time!

Liberalism is a reign of terror. It brings war, suffering and hunger for millions upon millions. For the majority of the world’s population, it means economic descent and a lack of prospects. For a few it brings untold riches. Even in its core countries, it is becoming less and less able to keep its promises. Societies are splitting up, and large parts of the middle class are falling. Small minorities benefit, while the majority is no longer politically represented.

Pelosi’s hoped-for demonstration of power, in all its futility, has made clear the state of the West and its liberal values. It’s all about enforcing one’s own claims to power. It’s not about values. The West has long since lost its values. It is therefore time for liberalism to step down. The ever-increasing rapprochement between Russia, China and India and the associated integrative impact on the Eurasian continent give hope that the era of liberalism is nearing its end.

The new powers protest that they will restore international law. In their model, sovereign states that are completely different culturally and in their traditions meet on an equal footing. Pelosi’s politically completely absurd visit to Taiwan, during which the whole arrogance, but also the banality of Western-style political thinking was shown to the world, has accelerated the process of replacement even more. This world really does not need foolish old people as authoritarian rulers.

More on the subject – Multipolar world: Why the current crisis is bringing India and Russia even closer together