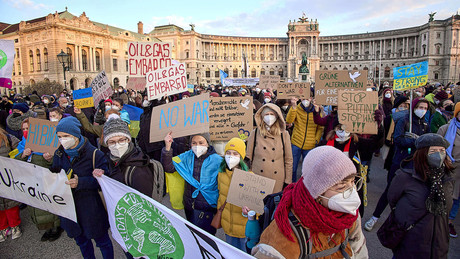 The EU sanctions on Russia are driving the EU deeper and deeper into the crisis. With winter approaching and inflation ramping up, popular support for the measures is crumbling. In Austria, a majority of citizens are now apparently demanding an end to this self-destructive policy.

The tightened sanctions that the EU imposed on Russia after February 2022 will soon last half a year without changing Moscow’s policy by a millimeter. But it cannot be said that the EU sanctions have remained entirely without consequences. Not at all, because their considerable effect unfolds in a targeted manner against their ‘own’ companies, that is, against their own national economies in the EU area. The social consequences can now be observed in all EU countries.

Against this background, the Austrian newspaper Kronen Zeitung and its television channel krone.tv asked about the mood among Austrians. The survey was carried out on behalf of the broadcaster Pulse4 from the “Institute for Demoscopy and Data Analysis” (IFDD), which regularly acts as a media partner of this newspaper and the publications and media portals associated with it.

In the show “Enquired” presented one of the directors of the IFDD, Christoph Haselmayer, the results of the opinion poll. In short, his findings for the federal government in Vienna are devastating – as are those for Brussels’ Russia policy.

Similar to the Hungarian population, the majority of Austrians now seem to reject the anti-Russian sanctions. For example, 82 percent (of around 1,000 survey participants) would agree in whole or in part with the following statement: “While Vladimir Putin is pursuing his war strategy, we in Austria are suffering from the sanctions against Russia.” The Austrians would thus agree with the conclusion: “We suffer from the sanctions more than the Russians.”

More than two-thirds of Austrians are also critical of the role played by Vienna’s politicians: When asked “Is Austria neutral in the Russian war of aggression against Ukraine?” 67 percent of those questioned answered no, because Austria, as an EU member, supports the sanctions. On the other hand, 28 percent said that Austria was neutral because it did not deliver weapons to Ukraine.

Austrian society is much more divided when it comes to arms deliveries. The question of whether more arms should be supplied to Kyiv because other European governments, including those involving ‘green’ parties, are arguing for it did not paint a clear picture. When asked “Should Western countries continue to supply arms to Ukraine?” 44 percent of Austrians think yes, 45 percent no. In view of these attitudes, Haselmayer spoke of a “complete stalemate”.

A fourth question related to the sanctions regime as such and was aimed directly at the viewers of the Puls4 channel. It was asked to what extent the respondents wanted to maintain the sanctions themselves or not. The question was answered by almost 7,000 people: 48 percent were against sanctions, 43 percent were in favor. Haselmayer sums up the mood as it appears in the polls:

“These are all indicators … that the mood is not just about to change, but that it has already changed.”

looking for ways out

In the opinion of the pollster, the younger generations would not want to restrict themselves because of the sanctions. Only those cohorts who were born shortly before, during or shortly after the Second World War are willing to make restrictions. You shouldn’t expect this from everyone else, especially not from the “baby boomers”. Because so far the economy has always gone “up” and people don’t want to simply give up what they have achieved.

Haselmayer added a warning: If the forecasts are correct, “it will be extremely ugly in the fall”. Because, see above, the mood is “tipping and already partly tipped”.

According to Haselmayer’s analysis, the situation is complicated by statements made by top political personnel.

Although the “electricity price cap” announced by the federal government in Vienna could bring some relief, the effect remains to be seen. On the other hand, a general cap on energy prices is likely to be necessary. But this alone would be of little use if the Austrian Federal President Alexander Van der Bellen “insulted” about half of the Austrian citizens at the Salzburg Festival. The head of state said that anyone who is critical of Ukraine or the sanctions is actually acting as a “Russian collaborator”. Haselmayer described this statement as a “massive transgression of boundaries”:

“Not every Federal President. Not everyone has as many tens of thousands of euros gross a year at their disposal as the Federal President in the Hofburg, but there are many people who don’t know how to feed their families the next day.”

In this respect, the pollster suggested that Austrian politicians orientate themselves more towards Hungary and Orbán’s policies: According to representative surveys, the Hungarian population is more pro-Russian or “opposed to the Ukraine-Russia war”. Orbán picks up on this mood. He is pursuing a corresponding policy because he has a “feeling for the people outside” and they Representation of Hungarian interests put in the first place.

According to Haselmayer, depending on which measures the Viennese government would or would not take, protests like the French “yellow vests” could break out in Austria from the fall.

More on the subject – Kremlin responds to allegations by Siemens: Need legal evidence, not just words