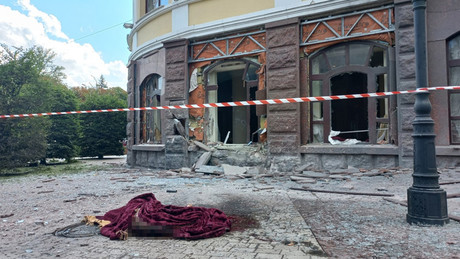 A report by Eva Bartlett

Last Thursday at 10:13 a.m. local time, the Ukrainian army again began shelling the center of Donetsk with artillery. Five powerful impacts were heard within ten minutes. The latest blast blew out all the windows in my hotel’s lobby, including the glass facade of a lounge – where journalists often stay, either before leaving to report on the front lines or when returning from it. I had crossed this lounge about a minute before the impact at the hotel. A cameraman’s assistant who was there at the time of the fifth blast suffered concussion from the blast of the blast.

A woman walking past the building at the moment of the impact was killed instantly, as were four other people, including a soldier and a grandmother with her six-year-old granddaughter. Telegram channels from Donetsk have been flooded with video footage taken by passers-by showing dead, injured, damage and horrified people. One of those hard to stomach Telegram posts (warning: disturbing Recordings) shows a man enduring the gruesome sight of the bodies of his murdered wife and grandson on a street two blocks from the hotel. The number of injured was not finally known at the time this report was written. According to initial estimates, the number is at least ten, including a paramedic and a doctor.

Reading the news gives you the benefit of being warned about disturbing footage, giving you the choice to look at images and videos of the carnage that happened in Donetsk last Thursday, as well as those from the past eight years of the Ukrainian war in Donbass, not to look at. Local people, however, receive no warning and have no choice about whether or not to see the mutilated remains of a loved one or a stranger. As uncomfortable as it is to watch such footage, it must be shown if the world is to know the truth about what is happening in Donbass; and to give a voice to locals who are being killed and terrorized by Ukrainian forces while Western corporate media choose to look elsewhere or even try to cover up these crimes.

Chronology of an artillery attack

When the shelling started, I was in my room editing footage from the previous day of the aftermath of another shelling in a Donetsk district. What you never learn from most Western media reports is that artillery shelling is so common here that I didn’t pay much attention to the initial explosion, except that it seemed louder than usual and the alarms of parked cars in the area went off .

Seven minutes later there was another explosion, this time much louder and much closer. Smoke could be seen through the windows rising north toward the sky about 200 meters away. This would be right near the opera house, where the funeral service for a commander of the Donetsk People’s Republic, Olga Katschura, who died last week, had just begun.

A minute later, another loud bang drove me out of my room, which was across from the artillery hits. Luckily the only damage at the end was a shattered window. Down in the lobby, journalists who had stayed in the hotel and others outside took shelter in the hallway, ready to flee to the basement should things escalate. One of my colleagues told me that he was preparing for a report and was about ten meters from where the last shell fell. “I think they tried to target the funeral service, but also us journalists,” he said, adding that there was probably a woman lying outside who had a leg ripped off and who is probably dead by now.

One might assume that the only intended target of the Kyiv forces was the funeral service for Colonel Kachura, perhaps with the aim of sending a message to the military and civilians of the Donetsk People’s Republic. Aside from the fact that this would be outrageous in itself, it’s unlikely that a hotel known to host journalists was just “collateral damage”. Ukraine routinely prosecutes, censors, arrests, tortures, targets and kills media workers.

Kyiv Armed Forces know full well that many journalists stay at this hotel because of its central location and stable WiFi. Many often broadcast their live reports outdoors, right in front of the hotel. And they are the ones who reported that Ukraine was conducting insidious, internationally banned “butterfly” mines over the city scattered has – the latest item on Kiev’s list of war crimes. At least until today. These anti-personnel mines are not designed to kill anyone who steps on them, but to rip off feet or entire limbs. Children, on the other hand, especially small children, risk certain death due to their short height. Ukraine has repeatedly fired rockets containing such mines as cluster munitions, deliberately aiming them at civilian areas in Donetsk and other Donbass cities.

After the explosions in central Donetsk, emergency services arrived at the scene. After the situation had calmed down, we journalists went out into the surrounding streets to document the damage and the dead. The woman I was told about was lying in a pool of blood, covered by a curtain that had been thrown out of one of the broken windows.

You didn’t stay calm for long. Ukraine immediately resumed the shelling and we ran back into the building as soon as the first impacts were heard. “It’s standard practice, they shoot at a place and then shoot at it again, so we’re right in the middle of it,” a Serb standing near me told me. The head of the local Emergency Situations Headquarters told me that Kiev’s troops often fire triple fire, not just double.

It is believed that Ukraine used a standard NATO 155mm caliber weapon in this attack. If true, this is further evidence that Ukraine is using western-supplied weapons to slaughter, maim and terrorize civilians in the Donetsk and Lugansk People’s Republics.

If Kyiv, by attacking a hotel full of journalists, wanted to dissuade them from reporting on the war crimes committed by Ukraine, then this method will not work. Most of the journalists who report here on the ground do so because, unlike the West, with its crocodile tears for the conflicts it has created, we are genuinely concerned for the lives of the people here.

Eva Bartlett is a Canadian freelance journalist and activist. She has spent years on the ground in conflict zones in the Middle East, particularly in Syria and Palestine (where she lived for almost four years). She tweets at @EvaKBartlett

More on the subject – Peski’s “meat grinder”: How the Ukrainian leadership sacrifices its soldiers