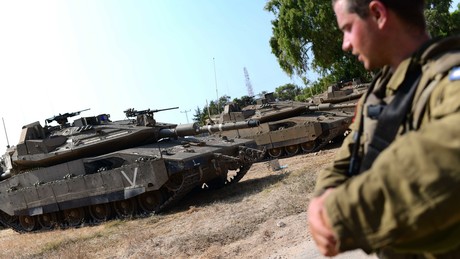 Israel on Friday launched a wave of airstrikes into the Gaza Strip, killing several people including Taisir al-Jabari, a commander of the al-Quds Brigades, Islamic Jihad’s military arm. Israel said the attacks were targeting the militant group and that it was responding to an “imminent threat” following the arrest of a senior militant in the occupied West Bank earlier in the week.

At least 10 people were killed, including al-Jabari and a five-year-old girl, according to the Palestinian Health Ministry in Gaza. It did not specify whether the others were combatants or civilians. At least 55 people were wounded in the Israeli attacks and treated in hospitals.

The attacks could spark another war in the area ruled by the militant Islamic group Hamas and home to around 2 million Palestinians. The assassination of a senior fighter could trigger rocket fire from Gaza and bring the two sides closer to war.

“The Israeli government will not allow terrorist organizations in the Gaza Strip to set the agenda in the adjacent area and threaten the citizens of the State of Israel,” Prime Minister Jair Lapid said in a statement. “Anyone trying to harm Israel should know: We will find you.”

Lapid took over as acting prime minister ahead of November’s elections and hopes to keep it. He has experience in diplomacy, having served as foreign minister in the outgoing government, but his security expertise is less tried.

Islamic Jihad confirmed that Taisir al-Jabari, his commander for the northern Gaza Strip, was among those killed. He was the successor to another fighter killed in an airstrike in 2019.

A few hundred people gathered outside the morgue of Shifa Hospital in Gaza City. Some went in to identify relatives and then came out crying. One shouted, “May God have vengeance on the spies,” referring to Palestinian whistleblowers working with Israel.

An Israeli military spokesman said the attacks came in response to an “imminent threat” from two militant groups armed with anti-tank missiles. The spokesman, who briefed reporters on condition of anonymity, said al-Jabari was targeted. According to the information, he was responsible for “several attacks” on Israel.

An increased level of security was announced on Friday for the Israeli areas around the coastal strip. The military announced a “special situation” on the home front, with closed schools and restrictions on other activities in communities within 80 kilometers of the border. Israeli attacks continued into the evening.

Israel earlier in the week closed roads around the Gaza Strip and sent reinforcements to the border in preparation for a revenge attack following Monday’s arrest of the Islamic Jihad leader in the occupied West Bank. A member of the group was killed in a firefight between Israeli troops and Palestinian militants.

Israel and Hamas have fought four wars and several minor skirmishes in the 15 years since the militant group seized power in the coastal strip from rival Palestinian forces. The last full-fledged war took place in May 2021. Tensions rose again earlier this year after a spate of attacks inside Israel, near-daily military operations in the West Bank and clashes at a holy site in Jerusalem.

Islamic Jihad leader Ziad al-Nakhalah told Iranian TV channel al-Mayadeen that “the fighters of the Palestinian resistance must stand together to confront this aggression.” He said there would be “no red lines” and blamed Israel for the violence.

Hamas spokesman Fawzi Barhoum said: “The Israeli enemy, who started the escalation against the Gaza Strip and committed a new crime, must pay the price and take full responsibility for it.”

Senior Hamas official Ghazi Hamad called the latest attack “a brutal crime, a massacre perpetrated against our people by the Israeli occupation.”

Hamad told Al Jazeera there was “no justification” for the attacks, adding that Palestinian groups have the right to defend themselves and “protect” their people.

According to him, the factions in the Gaza Strip have maintained “good coordination” and are looking for the “best option for the Palestinian people”.

“I think Israel is not interested in mediation…there is no place for mediation, no place for peaceful talks,” Hamad said. “Our people are waiting for the Palestinian resistance to make the decision and retaliate.”

Islamic Jihad is smaller than Hamas and it is unclear how much control Hamas has over Islamic Jihad. But Israel holds Hamas responsible for all attacks that emanate from the Gaza Strip.

Israeli Defense Minister Benny Gantz visited communities near the Gaza Strip on Friday and said authorities are preparing “measures that will remove the threat from this region.”

Israel and Egypt have maintained a strict blockade over the area since Hamas took power in 2007. According to Israel, the blockade is necessary to prevent Hamas from expanding its military capabilities, while critics see the policy as aimless collective punishment. Around two million people live in the Gaza Strip under very poor conditions.

Mohammed Abu Selmia, director of Shifa Hospital, the largest hospital in the Gaza Strip, said hospitals were experiencing shortages after Israel imposed a full lockdown on the Gaza Strip earlier in the week. He said there were enough supplies and essential medicines to keep hospitals supplied for five days in normal times, but with the new round of fighting “they could run out at any moment”.

Israel canceled an expected fuel shipment for the Gaza Strip’s only power plant, which was due to shut down early Saturday if fuel did not reach the area. Even when the power plant is running at full capacity, the inhabitants of the Gaza Strip have to reckon with power outages lasting several hours every day.

“We stress that the international community must act urgently to end the occupiers’ repeated attacks on civilians,” Qatar’s foreign ministry said in a statement.