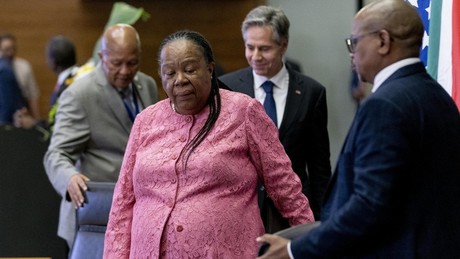 The South African foreign minister accused some western states, which she did not name, of wanting to put pressure on her country to get it to take sides in the war between Russia and Ukraine.

In the press, her statements were interpreted as distancing herself from Washington’s attempts to isolate Russia and, increasingly, China. Relations between South Africa and the US are considered strained due to South Africa’s independent foreign policy and its refusal to take a clear stance against Russia and join the sanctions.

At the same time, Pandor stressed that she was pleased with Blinken’s confirmation that the US would not officially ask South Africa to choose either side in the Ukraine conflict. However, other countries in Europe would have put pressure on their governments to make such a choice.

“I’m glad Secretary Blinken has confirmed that America isn’t giving us a choice. I can’t recall any attempt by the United States to do so. But in terms of our interactions with some of our partners in Europe and elsewhere, there was there’s a sense of patronizing bullying in the direction of ‘You choose this or that’.”

On Monday, Pandor met US Secretary of State Antony Blinken in South Africa, who is currently touring to three African countries.

However, the South African Foreign Minister criticized a draft law that is before the US Congress in Washington. This draft, entitled “Combating Malicious Russian Activities in Africa,” could be used to punish African countries for their stance on the Ukraine conflict.

“We found the recent legislation passed by the House of Representatives in the United States of America very unfortunate, and we were hoping that the media would cover it more. Because if we believe in freedom, as I say, in freedom Freedom for all, then you can’t say, because Africa does that, you get punished by the United States So that was a disappointing passing of legislation by one house and we hope the other house [der Senat] will not consent to such objectionable legislation.”

South Africa and the other African states are sovereign nations that would be recognized by the UN Charter as equal – despite possible differences in economic power and charisma. For international cooperation it is important to respect each other. She personally does not like being told what to do under threat of sanctions.

The minister also pointed to the limited scope of relations between South Africa and Russia. Russia is a “very negligible” trading partner for South Africa. Trade between Russia and South Africa is only $4 billion compared to $20 billion with the United States.

More on the subject –Sanctions: US ambassador warns African countries against shopping in Russia