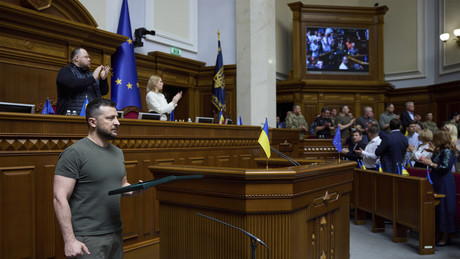 In July, members of the Ukrainian parliament decided to increase their salaries by 70 percent. It is unclear whether these additional government expenditures will be covered by international financial aid for the military.

On July 21, members of the Ukrainian parliament decided to increase their salaries by 70 percent raise. After the bill for this decision had only been submitted on July 18, the parliamentarians were able to carry out the vote unusually quickly, reported the Overton magazine. According to the magazine, this decision, which was unanimously approved by all the remaining parties, would have been possible so quickly in the absence of a lack of opposition.

Instead of 28,800 hryvnia as before, the “servants of the people”, as Vladimir Zelensky’s party is called, now earn 49,600 hryvnia per month. Since July 15, the hryvnia fell from 0.33 euros to 0.026 euros per hryvnia. This currently corresponds to around 1,300 euros. According to Overton Magazine, it was officially emphasized that

“that no additional funds from the state budget or funds from international partners are used for this”.

However, after Decree 7561 “Additionals to the salary of deputies are used from the state budget, which includes international financial aid”.

At the same time, unemployment and homelessness rose in Ukraine as a result of the war, while wages and tax revenue fell. According to Overton Magazine, an economic slump is therefore expected

“where the economy is likely to collapse by half or more and the state would need anywhere from $5-9 billion a month in foreign financial assistance to remain viable.”

According to the magazine, the increase in MPs’ salaries has not been well received on social media, where anger is spreading. Especially since the surcharges of 30,000 hryvnia per month paid to all soldiers since the beginning of the war had been canceled due to increased military spending. Only soldiers within the combat zone and soldiers during combat operations still received surcharges of 30,000 and 100,000 hryvnia, respectively.

The minimum wage in Ukraine is currently 6,500 hryvnia, the equivalent of 176 euros, and the average salary is according to work.ua 15,000 hryvnia.