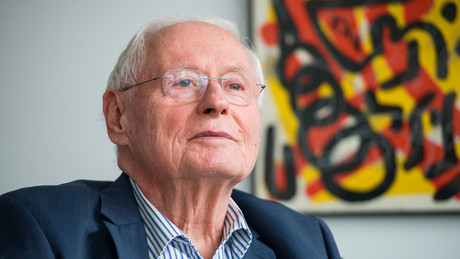 As part of the Pleisweiler Talks series organized by Nachdenkseiten, Oskar Lafontaine (founder of the Left Party, today independent) spoke on September 17 about the current government’s Eastern and Russian policies. The starting point for his remarks is the Ukraine war. The reflection pages published these noteworthy ones on their website speech.

Albrecht Mueller, founder of the reflection pages and in the 1960s and 1970s head of planning in the Chancellery, introduces the evening and right at the beginning points to an obvious dysfunction of the current democratic culture in Germany: Despite Lafontaine’s level of popularity, no press representatives are present. The published discourse does not reflect opinions deviating from the mainstream, not even critically. If there is no other way because of the news relevance, then discriminatory and defamatory, as at the time of the demonstrations against the government-imposed measures to contain the corona pandemic. Even journalistic formats such as the Tagesschau used defamatory terms such as “corona deniers” and “conspiracy theorists” to describe the opponents of the measures and placed them under the general suspicion of right-wing sentiment. Opinions and reports mixed up in the articles – actually a beginner’s mistake, but one that, when applied systematically, turns journalism into propaganda. The latter is the case in Germany.

For this reason, the initiative of Müller and his editors is noteworthy. From the website, which initially dealt primarily critically with the agenda policy of the first red-green federal government, a whole network of civil society commitments has now grown, which makes a contribution to democratic culture in Germany. Germany needs it badly. In return, Müller and the makers of the Nachdenkseiten are mocked by the mainstream for this commendable commitment to promoting democracy and put in the right corner. The state of the major media in Germany is questionable. Formats such as the reflection pages and the expansion of your readership are all the more important. It is now a sign of courage in Germany to obtain information from sources outside the mainstream. Anyone who confesses to this is quickly attacked openly.

In his speech, Oskar Lafontaine provides a clear geopolitical analysis. The USA has the openly formulated claim to be the sole world power. The rise of China and Russia threatens America’s claim to leadership.

With the claim to be the sole leading power, the USA cannot at the same time lead a defense alliance like NATO claims to be. Lafontaine draws attention to this contradiction. The Western system is designed for domination and expansion, not for self-defense that preserves borders. The United States, as NATO’s leading power, is not compatible with the defensive self-description of the transatlantic alliance. Both NATO and the US seek to expand their power and control the world. That is the clearly and unequivocally formulated claim of the USA.

The war in Ukraine should also be seen against this background. It is a classic proxy war between the US and NATO on the one hand and Russia on the other. It is not about the freedom and independence of Ukraine, nor about human rights and democracy, but only about geopolitical spheres of influence and power.

Embedding Ukraine in the western alliance has been planned for a long time, Lafontaine proves. Lafontaine’s comments on long-term US geostrategic planning are backed up by actual historical events. On the NATO summit 2008 in the Romanian capital Bucharest, the alliance opened its doors to membership from Ukraine and Georgia.

After the 2014 coup, Ukraine amended its constitution, abandoning its constitutional status of neutrality. The goal of NATO membership is now enshrined in the new constitution. Despite this development, Chancellor Scholz dismissed Russia’s fears during his first visit to Moscow. Joining is not imminent. However, the development proves a clear rapprochement and the mutual will to integrate Ukraine into the alliance – against Russia’s express concerns.

In 2019, the USA also unilaterally terminated the INF Treaty, with which the USSR and the USA agreed on the destruction of all short- and medium-range nuclear-capable missiles in Europe. Lafontaine points to the protests by the peace movement at the Pershing 2 base in Mutlangen in the 1980s. He was present as well as the writer Heinrich Böll and the founding members of the Greens Petra Kelly and Gert Bastian. Even I was there. The peace movement of the time saw the dangerous development and protested. Today, in the face of far more dramatic developments, the peace movement is largely absent.

The stationing of medium-range missiles on the territory of the Federal Republic has massively increased the risk of a nuclear war in Europe. The USA believed and believe in the possibility of being able to limit a nuclear war to Europe. This is dangerous for Europe. The reaction time in the event of an attack has been significantly reduced for the Warsaw Pact through the stationing of medium-range weapons in West Germany. This triggered major security concerns in Germany and subsequently protests.

From this point of view of the ever shorter reaction time, it is completely understandable that Russia sees a possible stationing of nuclear weapons on its immediate border in Ukraine as a violation of its security interests, to which the country must respond. In the event of an attack from Ukraine, the reaction time would be further reduced even with the weapons technology of the 1980s. However, the demand for security guarantees, with which Russia turned to both NATO and the USA, remained unanswered.

Lafontaine clearly takes a stand. Nevertheless, he considers Russia’s invasion of Ukraine to be a violation of international law and therefore an aggressive act. Double standards shouldn’t be used. If one considers the NATO attack on the Republic of Yugoslavia to be a breach of international law, one must do the same in the case of Russia and Ukraine.

But that’s where I think the problem starts. The responsibility to protect, which had to serve as a justification for the attack on Yugoslavia, is now part of international law. In its interventions, the West invokes its responsibility to protect. Russia is doing the same in the case of Ukraine. Ukraine is committing genocide against the Russian-speaking population in the east of the country. Reports after the recapture of areas by the Ukrainian army make it clear that this cannot be dismissed out of hand. There is violence.

Oskar Lafontaine is right. There must be no double standards. But then the problem of the responsibility to protect as part of international law must be discussed and, as part of coded international law, it must also be up for discussion. It is unacceptable that the German government is still invoking the responsibility to protect for the bombing of Belgrade, while Russia is denying this right in the case of the Donbass.

In this context, Lafontaine is of course right when he speaks of the double standards of the federal government and German foreign policy. German foreign policy is contradictory. Instead of gas from Russia, the German government would like to purchase gas from Qatar and Azerbaijan for moral reasons. The human rights situation in both countries is much worse than in Russia. But there are only moral concerns about those countries that evade the US’s claim to hegemony. In its mendacity, the argument makes clear the vassalage of German politics.

Important posts such as foreign minister, defense minister and economics minister are occupied by people who represent deeply reactionary positions in foreign policy, at the same time appear to be completely intellectually overwhelmed by the task entrusted to them, and who also cultivate anti-Russian resentment, which is clearly marked by racism.

Lafontaine shows the Greens using the language of fascism. In essence, Baerbock’s claim that he wants to ruin Russia is no different from the idea of ​​a war of annihilation against the Soviet Union. Only the means are different. Today an economic war, then the campaign to the east.

Lafontaine calls for an independent security policy for the EU that takes into account the actual security needs of Europeans. Independent of Russia and China, but above all independent of the USA, but of course open to cooperation in the field of peace policy. Lafontaine proves that nuclear sharing contradicts this need, because it makes Germany and Europe the venue of a nuclear conflict between the USA and Russia in an emergency. This is life-threatening for Europe. He interprets the fact that this is not discussed in Germany in its explosive nature as an indication of a dysfunctional media landscape. Germany’s vital interests are not the focus of politics and the media.

Lafontaine gives a voice to reason and peace politics. This is all the more important at this time because sensible foreign policy positions that strive to balance interests are currently not heard in Germany, but are denigrated. The political and media establishment in Germany has returned to the mental state that made the General Plan East possible. This must be pointed out. Again and again. Until political reason returns and Germany gives up its reactionary course of confrontation and follows Brandt’s policy of détente. It is in the vital interest of Germans, the citizens of the EU and the people of Europe.