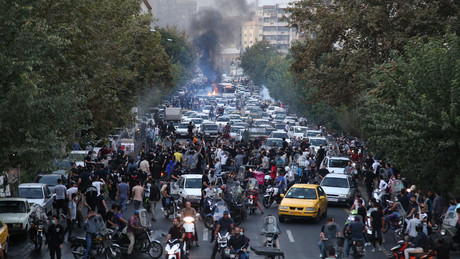 Mahsa in Iran and Zainab in Iraq: two dead Middle Eastern women. While the West pays media attention to the first woman, it ignores the last case. The media campaign is not about women’s rights, but about the weakening of Iran.

Riots have been reported from Iran in recent days, with many dead, after a young woman was detained by the “morality police” in the capital Tehran because of an “inappropriate outfit”. Mahsa Amini collapsed in mysterious circumstances at the police station and was pronounced dead at the hospital three days later.

The dramatic death of the 22-year-old has sparked protests in Iran, with Western opinion leaders attempting to spread their own narrative about the incident in a large-scale media campaign. According to Western media, Mahsa died in the custody of the so-called “morality police,” while Iranian media, citing initial medical investigations, said the young woman had died of heart failure without outside influence and due to previous illnesses. President Ebrahim Raisi had already launched an investigation into Mahsa’s death before he left for New York and telephoned the family of the deceased.

According to the Iranian authorities, the aim of the so-called “moral police” is to preserve the social order, which is tied to the country’s values ​​and traditions. As soon as one causes a public nuisance, the issue of “dress code” becomes relevant for society in Iran. However, within the Iranian leadership, the concept of “moral police” is a contentious issue that has supporters and opponents. In addition, the regulations on women’s dress have recently been interpreted so loosely that women can go out in public with a transparent scarf that leaves most of the hair visible.

Mahsa’s death has fueled Iranphobia in recent days, with Western media attempting to elevate separatist activists in their reporting due to the deceased’s Kurdish origins. This is no coincidence insofar as a huge wave of protests has unfolded in the province of Kurdistan and the border areas in the past few days. According to the Iranian secret service, it prevented several bomb attacks during the protest demonstrations. Kurdish militias and members of terrorist organizations are said to have been involved in attacks on police officers and security forces in recent days.

It should be noted that the main source of the western media in its news gathering on the protests in Iran has been the London-based Persian-language satellite channel Iran International, directly sponsored by Saudi Arabia and Mohammed bin Salman. The Saudi channel aims to propagate separatist activities in Iran and question the concept of Iran as a collective identity.

According to local observers, the main elements of the protests in Iran in recent days had been organized to sow disruption and chaos in the cities: burning the Iranian flag, pouring diesel on the streets, throwing stones, attacking the police, motorbikes and burning dustbins and destroying public property. In one instance, a police officer was set on fire by an angry mob and later succumbed to his injuries.

Mahsa’s death appears to have come in handy for Western leaders to put more pressure on Iran. Since the Ukraine war, the West has been doing everything it can to destabilize Iran through a controlled color revolution and to weaken the anti-Western front on a geopolitical level. Above all, the global West has panicked because of the new developments: Iran was recently accepted as a new full member at the summit of the Shanghai Cooperation Organization (SCO). The SCO is seen as a counterweight to Western-dominated organizations like NATO. At the same time, Tehran effectively gave up its neutrality in the Ukraine war and delivered drones to Russia. The Iranian leadership is beginning to believe that if Russia were to lose the war in Ukraine, NATO would advance to Iran’s border in the North Caucasus. NATO fears that Iranian drones could become a “game changer” in day-to-day operations at the front.

The media campaign in the West surrounding Mahsa’s death is not about supporting women’s rights, it is about weakening Iran. To prove this, suffice it to point to another recent incident that exposes Western double standards: a 15-year-old girl named Zainab Essam Al Khazali was shot down by the US military on September 20 in a Baghdad suburb during a military exercise shot, but not even a single Western media outlet reported on the death. For the West, there is an enormous difference between Mahsa’s death and Zainab’s. The first incident may perpetuate US hegemony even if Western opinion makers, in reporting Mahsa’s death, cite a source from a country that promotes reactionary ideology such as Wahhabism.

More on the subject – Iranian drones in action against HIMARS: Will they turn the tide in the Ukraine war?