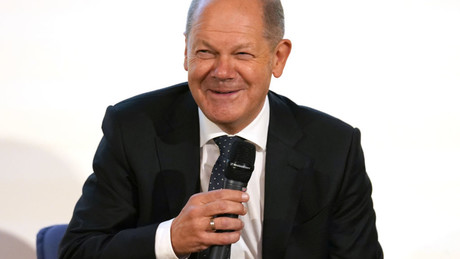 The traffic light coalition has agreed on a gas price brake. When presenting the new “defense shield” against high energy prices, the chancellor called the federal government’s initiative a “double boom”.

Chancellor Olaf Scholz (SPD), Economics Minister Robert Habeck (Greens) and Finance Minister Christian Lindner (FDP) gave a joint press conference in Berlin, at which Scholz was connected digitally due to his corona infection. When presenting the decisions of the previous round of talks, the Chancellor summarized the results. Included modified he said about the past state aid in the Corona crisis in 2020:

“Now we are creating the strength to do this with the defense shield, so that electricity prices, so that gas prices fall. Dramatically. So that they can be managed by citizens and companies (…) I said on another occasion, the actions we are taking are a bang.

You could say it’s a double boom here.”

The gas levy announced and controversially discussed by the traffic light coalition is now to be replaced by a “gas price brake”. Further statements by the Federal Chancellor from the announcement read:

“Russia is also using its energy supplies internationally as a weapon… In the foreseeable future, gas will no longer be supplied from Russia… Prices have to come down… The gas levy is no longer needed.”

“Quickly, quickly and for everyone to determine quickly” the energy prices for the citizens should fall promptly. Nobody in Germany, according to Scholz,

The chancellor pointed out that due to the defense shield that has now been announced, “even the high bills”, which some have already received “as an advance payment”, “can then be reduced again.” This is “the specific goal of the measure and the funding” that the government has set itself. Finance Minister Lindner in turn, according to the editorial network Germany (RND), with the words quoted:

Economics Minister Habeck commented According to Die Welt, it is about an “attack by Russia” and the “regime of President Vladimir Putin on our economy”. Here the federal government is taking up “the defense with the defense shield,” said Habeck. In addition, the minister called for energy saving, because “particularly in the private sector, consumption is not falling as much as is necessary.” Habeck literally:

According to the Economics Minister, the program that has now been decided could “run until the end of the winter after next, i.e. until March or April 2024.” Finance Minister Lindner emphasized:

“The better the measures that have been taken take effect, the less money of the 200 billion euros provided will be needed in the end.”

More on the subject – Recognize Your Enemy: How a German Government Should Respond to the Nord Stream Attacks