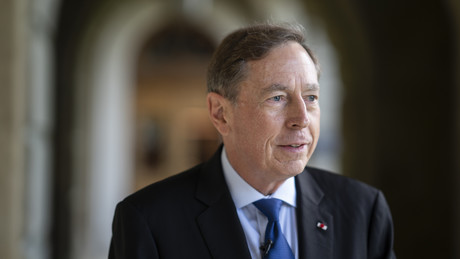 Western countries could intervene in the conflict not as a NATO army but as a US-led multinational force, said former CIA chief David Petraeus. This is possible if Russia does something “shocking and terrible” in Ukraine.

The United States could intervene in the armed conflict in Ukraine if Russia takes “shocking and terrible” measures said former CIA chief and former US commander in Afghanistan, David Petraeus, told L’Express.

Petraeus did not specify what he meant by such actions, but acknowledged that Western countries could respond “as a multinational force led by the United States, not as a NATO force.”

Washington and the NATO leadership have repeatedly ruled out any involvement in combat operations in Ukraine in the past. At the same time, the North Atlantic Alliance, the United States and the EU countries promised Russia consequences and a “strong military response” should it use nuclear weapons in Ukraine. According to Politico, the West has increased its surveillance of Russian nuclear weapons since September 21, when President Vladimir Putin pledged to defend Russia by all means and reminded that Moscow has nuclear weapons. Russia, on the other hand, dismissed the possibility of an operation in Ukraine and stressed that it was not a threat to anyone.

Western countries said that the Russian side should not win in Ukraine. They condemn Moscow’s actions, do not recognize the referendums on the accession of the DPR, LPR, Kherson and Zaporozhye oblasts to Russia, impose sanctions and support Kyiv, including by supplying arms.

US Army General Mark Milley said the US would defend a “rules-based order” in Ukraine in its fight against Russia. Other Western officials had previously made similar statements.

Similar statements have been repeatedly commented on by Russian officials. For example, Russian President Vladimir Putin said in a meeting with UN Secretary-General António Guterres on April 26:

“To us, the maxims of some of our ‘colleagues’ when they speak of a ‘rules-based’ world sound a bit strange. We believe that the fundamental rule is the United Nations Charter and other documents adopted by that organization, and not any papers that written by someone for themselves or to advance their interests.”

For his part, NATO Secretary General Jens Stoltenberg claimed that a Russian victory would be “a defeat for all” because it “would make the world more dangerous and make us more vulnerable to further Russian aggression”.

The Kremlin saw these words as confirmation that the alliance was fighting on the side of Ukraine in the conflict between Kyiv and Moscow. The first deputy head of Russia’s presidential administration, Sergei Kiriyenko, said their goal was “an attempt to liquidate Russia as an independent sovereign state.”